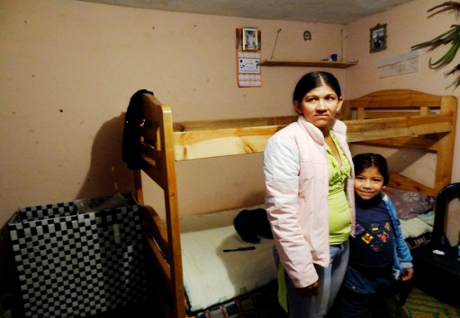 Many women flower workers are afraid to speak out about abusive conditions at work. Yolanda
Castenada at home with her daughter after being fired from her job as a flower worker.
Image: Amy Lieberman/TLW

(WNN/TLW) Bogotá –  As the workload in the flower fields increased in the lead-up to Valentine’s Day, so did the pain in a 32-year-old female worker’s right hand. The worker, who asked to be identified only as Juanita for fear of losing her job, approached her employer.

“He said, ‘No, Mamacita, you’re fine.’ If you are sick you are considered incapable and you get fired. So I’ve become conditioned to work in pain,” she said.

Juanita, a mother of two, works about an hour outside of Bogotá, amidst green valleys that receive regular rainfall and 12 hours of sunlight every day, due to the capital city’s proximity to the equator. The conditions are prime for flower cultivation.

After Holland, Colombia is the world’s second largest exporter of flowers, nearly 60 percent of will reach the United States, according to Corporación Cactus, a Bogotá-based non-governmental organization that supports the rights of women working in the flower export industry.

Colombia’s growing flower industry yielded $1.24 billion in sales in 2010, up from $966 million in 2006.  It’s the only industry in the country dominated by female workers, who constitute about 65 percent of the approximate 100,000-person workforce.

But Colombia’s nearly 50-year-long civil armed conflict – fuelled by both communist guerrilla groups like the Revolutionary Armed Forces of Colombia, known as the FARC, and insurgent, right-wing successor paramilitary groups – has contributed to precarious labor conditions.

Colombian President Juan Manuel Santos announced Tuesday, Sept. 4, that the government would sit down for peace talks with the FARC in mid-October, first in Oslo, and then in Havana.  But on Sept. 7, according to media reports, Santos rejected the FARC’s proposal for an immediate ceasefire until a final peace accord is established.

Colombia is considered to be the most dangerous country in the world for trade unionists. About 55 percent of trade union deaths between 2001 and 2010 took place in this South American country, according to the International Trade Union Confederation.

“There’s an atmosphere in Colombia, and in the floriculture industry, where being a unionist is similar to being a guerrilla fighter, or a terrorist,” explained Aura Rodriguez, president of Corporación Cactus. “If you are a unionist you will be treated with suspicion, at the very least.”

About 12 percent of Colombia’s flower workers are unionized. But about less than one percent of those unions are thought to be independent, as opposed to company-controlled.

Groups like Corporación Cactus say that as the flower industry in Colombia expands, its female workers’ specific vulnerability to labor rights abuses is worsening.

“The industry is profiting more and more and the level of production has not changed, but we’ve effectively seen a reduction of 24,000 workers over the last five years,” Rodriguez said.

“Because the majority of the women here are heads of their families, they need the work – that makes them more open to exploitation.”

Corporación Cactus handles about 200 legal cases a year, including claims of  unjust dismissals because of pregnancies and on-the-job injuries.

On a Sunday afternoon this past summer, four flower workers gathered on their day off in a squat, cement building in Tocancipa, one of the main flower cultivation towns outside of Bogotá. Corporación Cactus’ lawyer Omaira Paez took notes on the workers’ health cases and later commented on the nearly empty room, speckled with plastic chairs.

“People are afraid to come and meet with us,” she said.

One of the workers at the meeting, Yolanda Castaneda, 41, arrived late with her six-year-old daughter. She had fallen on her knee while pruning flowers in January 2011. After that, she said,  both her co-workers and employers had taunted her, saying her work performance was sub-par. She was fired last June.

Castenada told TrustLaw (advocacy and reporting mechanism for Thomson Reuters Foundation) she planned to fight to get reclaim her job and regain her approximate $280 minimum monthly wage.

“They fired me unjustly because they did not want to have someone who is injured working, because that person can’t do the same job like the other people can do,” Castenada said.

Exotic Farms, like the majority of both Colombian-owned and foreign-managed flower companies, does not employ union workers.

There are only two independent trade unions within the flower industry. That’s a dramatic decrease from the approximate 15 independent unions that existed in 2011, according to Lydia López, president of the independent union Untraflores.

Untraflores has 2,500 affiliates, but only 42 people – the majority of whom are women – at López’s company report their union membership.

She says she feels pressure from some co-workers and employers alike, but has not received any threats.

“Being a union member, a union leader, changes things a little bit,” said Lopez, 43, the head of her family. “I don’t know all of my rights, but I feel proud that I do help make a difference.”

Union members and affiliates are more likely to retain their contracts when they suffer on-the-job injuries, illness or become pregnant, said Lopez.

But they still remain susceptible to an abrasive political culture, said Nora Maldonado, the former secretary of a union called Sintrasplendor.

Sintrasplendor was operating out of a company called Splendor Flowers up until January 2011, when Splendor Flowers tried to contract out all 350 union members to a different flower company. A subsequent six-month strike resulted in the disbanding of both the union, and eventually, the liquidation of the stagnant company.

Maldonado hasn’t been able to find a job in the flower industry since and now works as a storekeeper, earning less than minimum wage.

Juanita, the unrepresented, injured flower worker, is unlikely to turn to a union for support in gaining sick leave or medical compensation for her injury. She didn’t know what the term “union” meant and asked for it to be explained.