‘Colombia will be 1st country in Latin America completely connected to internet:’ Santos 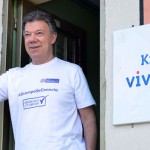 Colombia’s President Juan Manuel Santos on Monday claimed that his country will be the first in Latin America to be completely connected to the internet.

“All of the municipalities in the countries will be connected,” the President affirmed on the radio program, “On Line with the President.”

Connecting Colombia to the world wide web will be done through a program called “Vive Digital” or “Live Digital.”  This program will install kiosks in communities with more than 100 residents that will allow citizens to access the internet and receive free training on how to use different facets of a computer and information technology.

Four hundred kiosks were launched today across 10 departments. The goal of this program is to have 5,300 kiosks across the country by the end of 2014.

The head of state believes that this will give a significant boost for “boys and girls to start familiarizing themselves with technology.”

This announcement comes after an October study placed Colombia as 5th place for internet connectivity in South America and 6th place for Latin America.

MORE: Colombia middle of the pack for internet use in Latin America

Furthermore, Inter American Development Bank expert, Christine Ternent recently asserted that with better internet connectivity, Colombia could be an international example of how to use innovation to deal with a post-conflict economy and society, according to a development specialist with decades of experience in the country.