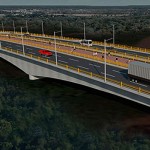 Officials from both countries announced plans to build the third bridge connecting Colombia to neighboring Venezuela, reported the El Pais newspaper on Tuesday.

The Venezuelan government announced that work will begin in December and last an estimated 20 months.

The Colombian construction company Conconcretos will reportedly work alongside Venezuelan company Pilperca to realize the project.

“On November, 15, the Venezuelan Ministry of Transport awarded the binational consortium composed by Colombian Conconcreto and Venezuelan Pilperca to build the binational bridge, linking the two countries,” informed Concretos in a company press release.

The construction is projected to include three parallel bridges and rely on a cantilever system. While the bridge in the middle will be reserved for pedestrians, the other two will be opened for automobile traffic.

The project was formalized in a bilateral agreement signed by both nations in Bogota on October, 16, but the impetus behind it has been building for some 20 years.

The new bridge is expected to reduce the heavy traffic that leads to frequent jams on the two other bridges already present in that area.