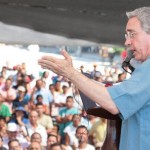 With congressional elections less than two months away, the party has also yet to issue a suitable logo for the official ballots. The party’s previous submission, which featured an image of Uribe’s face, was disqualified for violating an election rule banning the representation of candidates.

According to the El Tiempo newspaper, the Centro Democratico failed to reach the necessary number of signatures in the states of Putumayo, Cauca, Nariño, Casanare and Arauca. The National Electoral Council confirmed the right-wing political party cannot place names for House Representatives on the ballot in those states.

At this point, it is unclear whether the party will be excluded from participation in other states as well, as the the Colombain Registrar has yet to check signatures in 18 states across the country.

The setbacks could represent serious blows to the new political party’s aspirations to “take the Congress,” a strategy that has rested largely on the popular reception of the former president.

The Centro Democratico, meanwhile, has accused President Juan Manuel Santos and the FARC of conspiring to to prevent the party from forming in various states where the FARC is strongest.

In regard’s the election logo, Centro Democratico has already been rejected twice by National Election Council, most recently for using the term “Uribismo” in the logo. The party has until Friday to submit a third logo for the ballot, when 120 election ballots are schedule to be sent to press.

Nicolas Echavarria told El Tiempo that “the new logo will be presented next Thursday.”

The Centro Democratico is running Oscar Zuluaga against President Santos, who is leading comfortably in the polls. Uribe and Zuluaga have been severe critics of Santos’s efforts to reach a peace agreement with the country’s largest rebel group, the FARC.