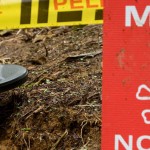 Colombia government trained 8,680 people in risk protection methods against landmines this week in the western states of Choco, Nariño, and Tolima.

“These training events are the result of two years of work (2011 to May, 2013) with the coordination of the United Nation’s Children’s Fund, Unicef, and the Presidential Program of Integrative Action Against Anti-personal Mines (PAICMA),” said PAICMA Director Daniel Avila to newspaper El Espectador.

Avila also said there is work to be done to decrease the risk  by landmines posed to children through the promotion of safety and prevention programs.