Colombia to Send Note to U.S. on Warship Presence in its Waters

The American ship was detected near Quitasueño Bank in the Caribbean archipelago of San Andres, Providencia and Santa Catalina, the subject of a territorial tug of war between Colombia and Nicaragua. 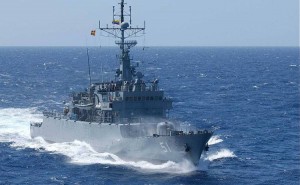 “The Almirante Padilla patrol boat approached the scientific research ship and asked if it had a permit to be here and it said no. The American ship was then invited to leave Colombian waters and it sailed away,” Santos told reporters during his visit to the editorial office of the daily Vanguardia Liberal in the eastern Colombian city of Bucaramanga.

The president said his government will deliver a diplomatic note to the United States Embassy, but gave the incident no further importance, saying that “this often happens.”

“Nothing out of the ordinary here and there’s no need to create a tempest in a teapot,” the president said days after two Russian bombers were spotted entering Colombian airspace over the San Andres archipelago.

The Colombian Foreign Ministry delivered a diplomatic note to the Russian government complaining of the penetration of Colombian airspace by two Tupolev-160s as they were traveling between Venezuela and Nicaragua.

Russia said its aircraft were operating within international airspace regulations.

The post Colombia to Send Note to U.S. on Warship Presence in its Waters appeared first on Colombia News | QColombia.com.