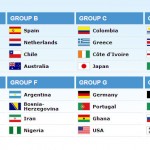 Colombia will be the leading team in Group C of the 2014 FIFA World Cup that’s kicking off in Brazil on June 12.

The South American country was dealt the C group in a draw defining which teams playing which in one of the most important sporting events of the year.

Because Colombia ended second after Brazil, it was determined to be group leader, meaning it can’t be in the same group as other prominent participants to the tournament.

Colombia’s first match will be on June 14 against Greece.

The World Cup in Brazil is the first for Colombia since 1998.