Colombia to bring Amazon deforestation rate to zero by 2020 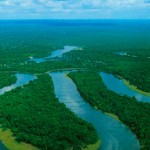 The Colombian government has developed a program to reduce the deforestation rate in the Amazon region, which will be implemented if a peace agreement is reached with the FARC during the negotiations in Havana, Cuba, reported RCN Radio Monday.

The program, called Vision Amazon, aims to provide resource programs for environmental conservation of forest affected by illicit crops. Additionally, it seeks to reduce the rate of deforestation to zero by 2020, the Minister of the Environment Luz Sermiento.

“We intend in six years to have a zero deforestation in the Amazon region of Colombia,” said the minister.

The government and the FARC, Colombia’s largest guerrilla group, are negotiating an agreement to end half a century of armed conflict in Havana. Negotiators have reached two preliminary agreements on land and political participation.

Currently, the negotiations are addressing the issue of illicit crops, which has been part of the cause of deforestation in the Amazon due to the cultivation of coca, authorities told local media.

Deforestation has reached 69,500 hectares, spread across the southern states of Caqueta, Guaviare and Putumayo in Colombia. These regions have also been affected by high rates of armed attacks by guerrilla groups.

The program has received international support from European nations, accounting for $125 million donated by Germany, Norway and the UK.

“We believe this is an opportunity for post-conflict,” said Sermiento and added that these “are issues that may be discussed at the table” of negotiations in Havana.