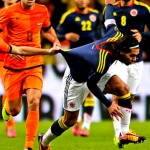 Colombia tied the Netherlands 0-0 in a skillfully executed but relatively uneventful exhibition match Tuesday between two of the top 10 seated teams headed to the World Cup in Brazil in 2014.

In the first ever match up in history between Colombia’s “Cafeteros” and Holland’s “Clockwork Orange,” both soccer clubs showed strong aggressive play that perhaps did not warrant the title of a “friendly” match.

Playing in a sea of orange in the packed Amsterdam Arena that fits 53,000 for soccer games, the Tricolor actually spent much of the game on the defensive despite the Netherlands being a man down for the latter half of the game.

While both teams have already proved that they have the chops to be formidable teams looking ahead toward summer 2014, with four yellow cards for Colombia, one yellow and one red card for two of the Netherlands’ stars, and zero goals, each team will perhaps need to focus more on consistent possession and shots on goal rather than roughing the other team up.

There were certainly penalties that were missed by the refs in this match.

The Netherlands, who’s team almost comically appeared to tower over Colombia in terms of height, put the first shot on net in minute seven, which was saved by Colombia’s goalkeeper Mondragon after hitting the crossbar.  Dutch midfielder Rafael van de Vaart put the initial pressure on Colombia.

Colombia continued early-on to try and get the ball to their prince of soccer, striker Radamel Falcao, but the Netherlands were putting pressure on Colombia’s poster child from the start and would not give him any room to maneuver.

At minute 14, on a breakaway, it seems as though van de Vaart would put one past the Tricolor’s goalkeeper, but he just barely missed his opportunity to score.

By minute 20, Colombia had regrouped and was trying to pass in formation between Falcao and midfielders James Rodriguez and Juan Cuadrado, but they were halted by a ferocious Orange defense.

Approaching minute 30, the game had increased in intensity and physicality though neither could really penetrate their opponent’s defense.

After hitting Pablo Armero in the face, Jeremain Lens was benched with a red card at minute 35.  Netherlands would have to continue a man down.

The first half concluded 0-0 leaving fans of both teams disappointed and checking their watches.

Coming into the second half, Aguilar had been benched and Macnelly Torres stepped on to the field. The Netherlands walked on with the same 10 players.

Besides a lovely exchange between Rodriguez and one of Holland’s midfielders earning Kevin Strootman a yellow card at minute 67, the game had pretty much stalled amidst better play, more aggressive contact, and a lack of action in either box.

Falcao received a yellow card at minute 86, and was promptly taken out thereafter.

In the end when the whistle blew, it was unclear if most of the stadium had left already or not.  Regardless of the excitement of the second exhibition match Colombia’s had since qualifying, the “Cafeteros” are still looking strong moving forward to Brazil next year.

The Tricolor went 1-1-0 in Europe with a win last week against Belgium.

Colombia is currently ranked fourth in FIFA’s world ranking behind Spain, Germany and Argentina in that order.  The Netherlands are ranked eighth.