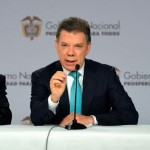 Colombia’s President Juan Manuel Santos has signed an order imposing fundamental changes to both Colombia’s Ombudsman’s Office and Prosecutor General’s Office Friday, in what he has declared “will have direct repercussions in improving the security of Colombians,” as well as a “higher capacity to attend to victims.”

Santos assured that with a “stronger, more effective [and] more efficient” Prosecutor General’s Office, “the natural and concrete result is that there will be more security, because there will be more instruments to fight crime and felony.”

The prosecuting institution will, Santos affirms, be a more effective instrument against crime and have a heavier presence throughout the country.

“It will be strengthened within the regions, a plea that we had been receiving for a very long time,” the Head of State said. “More presence by the Prosecutor General’s Office in many of the regions that don’t even have a public prosecutor.”

Furthermore, the improvements will mean that more specialized detectives and experienced personnel will be involved in investigations, and that public prosecutors will be specially trained in various disciplines.

Although citizen security has, according to the Colombian president, been “one of the absences, or needs, that we have detected the most in recent times,” the new legislation means that more staff will assume this responsibility.

Regarding the changes to the Ombudsman’s Office,

“With this reform, more gears, more instruments will be available for there to be a heavier presence in territories where we are seeing the most violation or weakening of the fundamental rights of Colombians.”

Similarly, the focus will be on broadening the Office’s influence in areas suffering the most human rights violations.

Another benefit to the nation’s citizens, Santos claims, is that the modifications within the Ombudsman’s Office will see it “strengthen all its actions in defense of the victims.”

“This is an incredibly important step, because the victims in this country, well until recently they didn’t exist, they weren’t recognized.”

In light of the on-going peace talks taking place between the Colombian government and the oldest rebel group in the country, the FARC, Santos emphasized the special interest taken in support of the country’s internal victims.

“The Victims Unit has made a monumental effort in the reparation of these victims,” Santos asserted. “We know we have to compensate a lot more. But the fact that the Ombudsman’s Office will have a higher ability to play this role, to attend to the necessities and plights of the victims — it’s an extremely important step in the direction we all want to be going in which is a country at peace, in which, hopefully in the future, there will be no more victims.”

The president finally thanked both the Prosecutor General, Eduardo Montealegre, and the Ombudsman, Jorge Armando Otalora, for the progress that had been made with the reforms.

“It’s hard to find a better step forward than this,” he said.