Colombian social organizations called to demonstrate next January 14 in rejection of political persecution and murder of several members of the Patriotic March movement. The protest, organized by the Congress of Peoples and the Workers Unitarian Central, among others, calls also protest the persecution against the political opposition and the criminalization of critical thinking.

The call, broadcast on the internet page of the organization Justice and Peace, was triggered by the recent arrest and detention of Professor Francisco Toloza, member of Patriotic March, held at the airport in Cucuta, North of Santander, on January 4, and charged of rebellion. 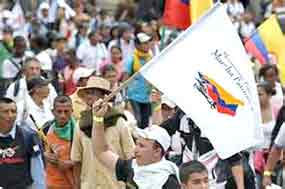 Toloza was arrested a day after the murder of one of the members of March and of the Agrarian National Bureau of Dialogue and Agreement, Giovanny Leiton in San José del Palmar, in Choco.

In a recent statement a spokesman of Patriotic March, Carlos Lozano, reported that last year 25 members of this movement were killed and another of its leaders, Huber Ballesteros, still remains behind bars another. Those are not gestures of peace, he said.

For the political and social movement, founded in 2012, the recent case of Toloza is not an isolated case, but a government response to the vocation of struggle of a people that refuses to remain being a prisoner of a war imposed by the powerful.”

This case, added the organization in a recent statement, reiterates the urgency of Colombia to open the real debate on guarantees for political participation, as well as to the agreements reached in the peace talks with ARC-EP are truly endorsed, to put an end to the persecution of social leaders.