First Round of Meetings to Take Place in Norway and Cuba; Santos Says There Will Be No Cease-Fire 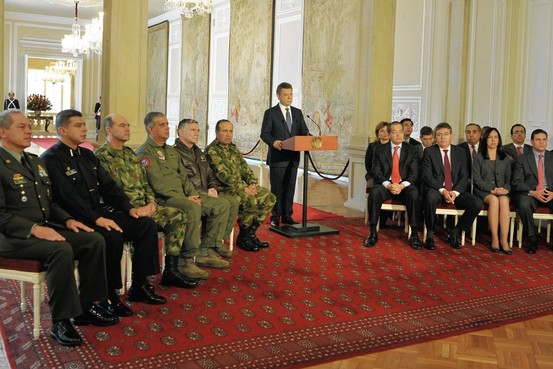 BOGOTÁ—President Juan Manuel Santos said Tuesday peace talks with Colombia’s guerrillas would start next month, staking his presidency and his place in history on the chance he can end a half-century war with Latin America’s oldest and most powerful insurgency.

“The responsibility of this decision will fall on my shoulders and no one else,” said Mr. Santos in a nationally televised address.

Last week, Mr. Santos announced that the Colombian government had been engaged in preliminary talks with the Revolutionary Armed Forces of Colombia, known as the FARC by its Spanish acronym, to end the long-standing conflict.

In Tuesday’s speech, Mr. Santos said the two sides had agreed on what he called a “road map” for the talks.

The first round of peace talks will start in October in Oslo and will then move to Cuba. The negotiations will be sponsored by President Hugo Chávez of Venezuela, who has been a strong supporter of the guerrilla group. Besides Cuba and Venezuela, Chile and Norway are also involved in the peace process.

“The doors of hope are once again open,” Mr. Londoño said, dressed in military fatigues and speaking before a huge photograph of the late Manuel Marulanda, the legendary former leader of the guerrillas.

“It is a very strong statement demonstrating they are ready to negotiate,” Mr. Valencia said.

Mr. Santos said the Colombian government wouldn’t make the same mistakes as it did the last time it negotiated with the FARC more than 10 years ago. Then, President Andrés Pastrana demilitarized a part of Colombia the size of Switzerland, allowing the FARC to regain strength as negotiations dragged on for nearly three years.

Mr. Santos said this new round of talks would last for months rather than years. If no progress was being made, then negotiations would end.

Mr. Santos said the Colombian military wouldn’t stop its operations against the guerrillas. It wasn’t clear which side didn’t agree to a cease-fire.

Mr. Santos said the government and the guerrillas had agreed to tackle five broad topics. These are:

The development of Colombia’s poor countryside so that peasants could raise themselves from poverty.

Guarantees that FARC guerrillas can exercise their political rights once they lay down their arms. A prior attempt at peace floundered in the 1980s when guerrillas who put down their arms were killed by right-wing paramilitary groups.

Getting the FARC out of the cocaine business.

A plan to reintegrate guerrillas into civil society.

Support of victims and the need to find out the truth about atrocities committed during the long conflict. “All Colombians have the right to know what happened, and who was responsible,” Mr. Santos said.

Mr. Santos said that peace was possible now because Colombia’s economy has boomed, giving poor Colombians a better future, and because achieving political change through violence is no longer seen as a real possibility in the world.

Peace is also possible because the FARC, which once numbered about 18,000 fighters, were battered by Colombian military strikes during the eight-year term of former President Álvaro Uribe, reducing the guerrillas to about 8,000 soldiers.

The guerrillas switched tactics when Mr. Santos came to power two years ago. They abandoned their efforts to control territory and are now carrying out hit-and-run ambushes.

The attacks have shown the FARC’s power to inflict economic pain on Colombia, as the government seeks to attract investors to its oil and mining sectors.

“They are the main worry for a lot of foreign investors,” said Ronald Pantin, the chief executive of Pacific Rubiales Energy, the second-largest oil producer in Colombia. “Oil exploration in some areas near the borders is very difficult” because of the FARC, he added.

The negotiations with the FARC represent a major gamble for Mr. Santos, who is likely to seek re-election two years from now.

The former defense minister would likely face an uphill electoral battle if he doesn’t clinch a peace deal.

Mr. Santos has been focused on passing a series of reforms that lay the groundwork for the peace process, such as a project to redistribute land seized by right-wing paramilitary groups.