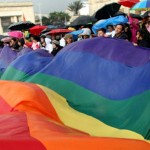 Colombia Senator Armando Benedetti filed a complaint against the mayor of Cartagena for alleged discrimination against the LGBT community after moving a gay pride parade without notice during the city’s independence celebration.

Benedetti explained that the allegations came after mayor Dionisio Velez moved the location of gay march without prior notice, and ordered the installation, and subsequent dismantling of a gay rights public display, costing public funds and headache over lost time for artists involved.

“Mayor Velez acted like a homophobe, like a discriminator, disrespectful of the LGBTI community,” said Benedetti. “The gay community must receive an apology from the mayor.”

The complaint was filed before delegates of the fiscal unit of the Supreme Court.