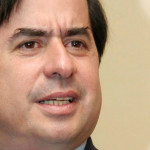 Colombia’s senate president on Friday asked rebel groups FARC and ELN to call a unilateral ceasefire during the upcoming elections in March and May.

Senator Juan Fernando Cristo (Liberal Party) made the call on a visit to the Arauca state in northwestern Colombia where both rebel groups enjoy a strong presence, and frequently carry out attacks against the military and local oil industry operations.

The FARC, the largest of the two guerrilla organizations, is currently upholding a Christmas ceasefire which is to end in a week. Delegates of the group are in Cuba to negotiate a peace accord with government representatives.

“We are calling on the FARC who are sitting down [at the negotiation table] in Havana, as well as on the ELN who have expressed — and we want to believe them — goodwill and their decision to sit down to negotiate with the government, to put to practice what they have been writing and saying in their statements during this [election] campaign,” Cristo said.

The senator asked both groups to “show a will for peace and allow congressional and presidential elections without the interference of arms, without the threat of kidnapping, without conditioning the electorate and without terrorist attacks.”

Both the FARC and ELN have been fighting the Colombian state since 1964.

The FARC began formal peace talks with the government in November 2012 following ten years of military losses against the state that has received US military support since the beginning of the century.

The ELN is not formally engaged in peace talks, but have repeatedly requested to enter negotiations.

Elections in Colombia will be held on March 9 for Congress and May 25 for the Presidency.