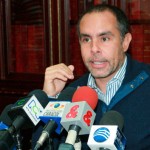 In the ad, deemed “polemic” by the newspaper that broke the story, a gay and lesbian couple are shown briefly kissing.

The scene then switches to one of Benedetti telling viewers that “the point here isn’t tolerance. It’s that they [the couples in the ad], you and I have the same rights.” A quote from former Mexican President Benito Juarez — “respect for the rights of others is peace” — also appears on the screen, linking the issue of gay rights with ongoing peace talks between the Colombian government and FARC rebels.

While the bill stalled in the Senate, other progress on the issue was made in the legal sphere in September, when a judge in central Colombia administered the first same-sex marriage in the country’s history.

The marriage was later annulled by a separate judge, after facing appeal from the right-wing Man and Woman foundation, only to be reinstated when yet another court voided the annulment.

In 2011, the Constitutional Court gave Congress a two-year window to pass legislation permitting same-sex civil marriage. In the absence of said legislation, the court said, same-sex marriages would be permitted automatically.

Opposition to equal marriage rights has come from a number of sides, including Inspector General Alejandro Ordoñez, whose office has mounted a large-scale legal pushback against each of the various marriages that have been administered since the September union.

The Man and Woman Foundation, meanwhile, has announced its intent to pursue a constitutional challenge on the issue.

It is still unclear whether the U Party will allow Benedetti to use his ad during in its broader campaign space, or whether the senator will be promoting the video on his own. But either way, it is a sign that the gay rights question will remain at the forefront of Colombian public debate.