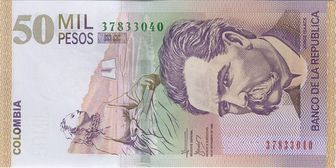 The government sold the securities due 2023, known as Global TES, to yield 4.5 percent, the Finance Ministry said in a statement. Colombia last sold Global TES in July 2010, when it offered more of its securities due in April 2021.

“This is an opportune time to tap markets when interest rates are at such low levels,” said Nader Nazmi, a Latin America economist at BNP Paribas SA in New York. “There is interest in countries that tell a good story and Colombia is one of those countries.”

Global markets are rallying after the Fed announced yesterday its third round of quantitative easing to bolster growth in the world’s biggest economy. Yields on Colombia’s international peso-linked bonds due 2021 have fallen 70 basis points, or 0.7 percentage point, this year to 4.45 percent, according to data compiled by Bloomberg.

Yields on the securities fell to 4.15 percent yesterday, within six basis points of a record low, before surging as bondholders braced for the additional supply from today’s sale.

Funds from today’s overseas sale will kept abroad, said Public Credit Director Maria Fernanda Suarez. “Under no circumstances will we bring those funds” into Colombia, she said in a phone interview.

The peso has rallied 8.1 percent this year, the best performance among the six most-traded Latin American counterparts against the U.S. dollar after the Chilean and Mexican currencies.

While transactions in the peso-linked securities are conducted in dollars, principal and interest payments are determined by peso fluctuations against the U.S. currency.

Bank of America Merrill Lynch and Morgan Stanley managed today’s sale, according to a government filing with the Securities and Exchange Commission.

“The result was positive in general terms,” said Benito Berber, a Latin America strategist at Nomura Holdings Inc. “The only drawback I find is that the amount is small, which doesn’t help when these Global TES lack liquidity.”
Investment-Grade

The Fed said yesterday it will expand holdings of long-term securities with open-ended purchases of $40 billion of mortgage debt a month and hold the benchmark rate near zero until at least the middle of 2015.

The U.S. moves will create “a lot of dollar liquidity, and this causes pressure on exchange rates,” Cardenas said, according to an audio recording of his remarks e-mailed by the Finance Ministry. “We will need to respond with more intervention in the currency market and take it into account for the central bank’s interest-rate decision.”