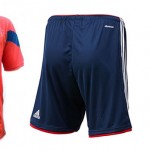 Colombia’s secondary or away kit will be primarily red with dark blue and white overtones, the national soccer federation said Thursday.

The kit manufacturer Adidas has chosen to revert back to the red jersey which has not been seen by Colombian fans since the 1990 World Cup in Italy.

The jersey will be complemented with navy blue shorts and matching red socks and will be the secondary kit to be used in this summer’s FIFA World Cup taking place in Brazil.

Adidas told newspaper El Tiempo that the design intended to “honor the Colombian team that brought notoriety to Colombian soccer thanks to the outstanding performances of the team in World Cup Italia 90.”

The Colombian soccer federation told Colombia Reports that the side’s first performance in the new kit will be a friendly versus Tunisia March 5 in Barcelona.

The  1990 World Cup was Colombia’s best performance in the sport’s most coveted competition, but fans will be hoping that the national side can at least reach the knock-out round as the current FIFA world rankings places them at number 5 in the world.

Colombia’s first fixture is against Greece on Saturday 14 June.