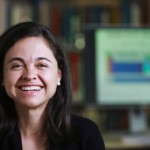 A physicist from Colombia won the highest US government award for young scientists for her work about ultracold atoms, Spanish news agency EFE reported on Thursday.

Rey told EFE she started her physics career against the will of her parents who wanted her to study engineering.

After finishing her studies in Colombia in 2000, Rey continued her career in the US, receiving an award for the best doctorate thesis in nuclear physics in 2005 which opened the doors for her to Harvard University where she began to work with ultracold atoms. She also earlier this year, won a MacArthur Foundation “Genius” Grant that allows her to spend$625,000 anyway she chooses over five years.

According to Rey, these atoms, kept at a temperature close to 0°K (-273°C / -459°F), can be controlled in such a way that they allow complex studies on quantum mechanics.

“This can lead to something called super-conductivity at high temperature, which allows current to pass without continually being dispersed,” Rey said.

This type of simulation could also be used to construct a quantum computer, that is, a computer that codes information using the smallest units of matter, rather than today’s transistors, to perform calculations, which would be capable of analyzing physical problems that scientist have not been able to solve up until today.

Contributing to the construction of a quantum computer is one of Rey’s lifetime goals, as she said in the interview, stating that “to see this become reality in five to ten years from now would be a dream come true.”

Colombia on the right track with science

Talking about her country of origin, Colombia, Rey affirmed a positive trend in the science field, claiming that “the situation in Colombia is improving at a good pace,” mentioning newly implemented doctorate programs in theoretical physics and scientists that were educated in the US that are now coming back to Colombia to form research groups.

Rey also mentioned that the key to this positive development would be to invest more in the educational system, passing on the enthusiasm for science at a young age.

Finally she addressed female scientists, saying that “the important thing is to have confidence in us. What I try is to encourage my students and women I know to trust themselves and to give their best […] and I’m sure that this way they can achieve their goals.”