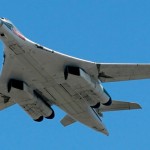 Colombia’s President Juan Manuel Santos said Tuesday that he will send a note to Russia accusing the eastern country of violating Colombian airspace twice this past Friday with military bomber jets. Russia has already denied these claims.

“The situation with the Russian bombers is this: on Friday, two Russian bombers flew from Venezuela towards Nicaragua, and while they did so, they flew through Colombian airspace.  As they were state military planes, they should have asked if they could fly through.  They did not ask our permission.  In that moment we simply asked our Foreign Ministry to send a note to Russia,” explained Santos Tuesday evening.

Russia explained last night that not only were the planes flying well within international airspace laws, the planes immediately Russia after their flight on October 28, according to local media.

Santos maintained that not only did the bombers indeed violate Colombia’s airspace, and but also they flew through a second time when returning from Nicaragua through Venezuela to Russia.  The first time he just made a complaint, but the second time, Santos told his Foreign Minister, Maria Holguin to send a note.

The Russian Defense Minister assured that the planes flew past the coast of Norway and the United Kingdom before landing in Venezuela, and then flew through the Caribbean to land in Nicaragua according to the initial plan.  Then they flew back to Russia where they are currently grounded.

The bombers were Tupolev-160′s or ‘Blackjacks,’ Soviet era war planes in use today. They are known for being supersonic and for being able to carry nuclear weapons.

Colombian radar picked up the violations on their small owned island of San Andres off the coast of Nicaragua.