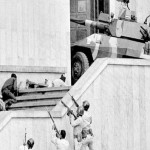 For the first time since the original incident, Colombia recognized responsibility for the problematic 1985 retaking of the Palace of Justice, in a session of the Inter-American Court of Human Rights (IACHR) Tuesday.

Adriana Guillen, Director of Colombia’s Agency of Judicial Defense of the Nation, admitted that the country deserves blame for its role in the deaths of and disappearances of dozens of Colombian civilians, saying “the Colombian state will not cease efforts to know the truth and create justice.”

Guillen added that “the wounds [from the incident] have not healed” and that “Colombia feels [the victims’] pain.”

Twenty-eight years ago today, the M-19 urban guerrilla group took over Colombia’s Supreme Court in Bogota, taking the judges hostage and demanding that the president at the time, Belisario Betancur, present himself to stand before a symbolic trial. In response, police and military units stormed the building using tanks and bombs, in what has been criticized as an overreaction and unnecessarily violent response.

When the fighting subsided the following day, 100 people had died, including 11 of the country’s 25 high-court justices. The takeover also caused extensive damage to the Palace of Justice itself, from a fire that was ignited during the clash.

Allegations soon arose of official misconduct and human rights violations, due to the disappearance, and suspected extrajudicial killing, of 11 civilians arrested by the police under suspicion of having ties to the urban guerrillas.

In Tuesday’s session, IACHR President Jose de Jesus was unequivocal in his conviction that the Colombian authorities had ”coordinated” torture and forced disappearances during the incident.

Victims of official misconduct present at the court hearing in Brasilia, Brazil, also condemned the Colombian state’s lack of acknowledgement of or compensation for victims during the decades following the event. Pilar Navarrete said, “for 28 years, the government has rewarded obstruction of the investigation.”

While accepting fault on behalf of the Colombian government, Guillen asked the court not to press further indemnity payments for the victims, claiming the state had already made decisions to make payments themselves.

No announcements have been made, however, as to what compensation will be offered for victims, or what charges will be sought against those deemed culpable.

A series of IACHR hearings will determine whether the court will impose its own set of sentences on the Colombian government.