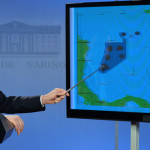 Colombia recalled its envoy to Nicaragua Wednesday night after the Central American nation brought a new set of complaints to the International Court of Justice (ICJ) alleging threats of agression.

Nicaragua presented its suit Tuesday in the Hague, renewing protests that a previous ICJ ruling has not been adhered to and claiming that Colombia has since “made threats of force,” the nature of which have yet to be made public.

In response, Colombian Chanciller Maria Angela Holguin called the country’s ambassador to Nicaragua back to Bogota for a special conference to discuss strategy pertaining to the ongoing dispute between the two countries over maritime territory.

Colombian Defense Minister Juan Carlos Pinzon applauded the diplomatic move, telling Caracol Radio that Nicaragua’s actions have been “pre-pubescent” and “pestilent” and attributing Nicaragua’s most recent formal accusations to the “three or four” navy ships he said have been patrolling drug trafficking routes in the disputed territory.

Relations between Colombia and Nicaragua have been steadily declining since the ICJ decided in favor of the Central American country last summer in a ruling Colombian President Juan Manuel Santos has since called “inapplicable” and refused to honor.

In the past year, Nicaragua has repeatedly attempted to use international channels to enforce the ICJ ruling, but the Santos administration has insisted that only bilateral negotiations can establish new borders, and little progress has been made.

Nicaragua refused a September offer by President Santos to establish a negotiation table, and a recent appeal to the United Nations has failed to produce any meaningful diplomatic action against Colombia, which currently enjoys favorable international standing due to the early success of its ongoing peace talks with the FARC rebel group.

It’s unclear what Nicaragua hopes to achieve with another ICJ ruling, as President Santos has previously rejected the body’s legitimacy in settling territorial matters.

Nicaragua, meanwhile, is embroiled in similar territorial disputes with neighbors Panama and Costa Rica, which, along with Colombia, have attempted to paint the Central American country as “expansionist.”

In an interview Wednesday with Caracol Radio, Holguin failed to specify when Ambassador Luz Stella Jara would return to Managua or what Colombia’s approach will be at that point.

The chanciller did emphasize that Colombia is committed to finding a diplomatic solution to the dispute, even as the rhetoric from the Nicaraguan military has taken a sharper tone, leading many to worry that the situation is headed toward conflict.

The ICJ has yet to indicate whether it will consider issuing a new ruling against Colombia in response to Nicaragua’s most recent complaint.