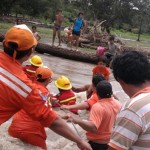 The rainy season in Colombia has left 2,500 families homeless, Caracol Radio reported Wednesday.
The heavy rains have affected about 17 municipalities in the central, north and west areas of the state Cauca.

In the town of Calima, there has been reports of collapsed drains causing several homes to flood.

According to the Risk Management of Disaster in Buenaventura, the flooding of the river Anchicaya located in the coastal city has affected 800 families.

Javier Riascos, director of the relief agency, told the radio that “attention also focuses on Yurumanguí, Dagua and Raposo rivers whose levels have increased alarmingly.”

The fire department were notified Tuesday in the municipality of Zarza after rains had clogged sewers causing flooding of the streets.

The Unit of Risk Management is expected to arrive Wednesday, after a 24 hour period of nonstop rains, and provide the first aid to more than 100 people.