Colombia’s peace talks have installed an international sub-commission, including an American and a Spaniard, that will seek to break the deadlock on how the Colombian state and rebels would pay for war crimes.

The six-person sub-commission is the second new body trying to speed up the talks that have been ongoing since November 2012.

Its creation is a major step towards achieving an accord on transitional justice, which seemed to have gone stuck as neither party wanted to take full responsibility over the internal conflict’s 7 million victims.

Additionally, the delays in the negotiations seemed to exhaust the patience of Colombia where conservative opposition forces, led by former President Alvaro Uribe, accused the administration of Juan Manuel Santos and the FARC of “exchanging impunity.”

While the main negotiation body is trying to negotiate victims and the fine print of partial accords made earlier in the negotiations, one sub-commission is now in charge of bartering a bilateral ceasefire while the second one is in charge of transitional justice. 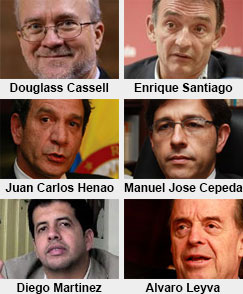 The judicial sub-commission is joined by one representative from the United States, Notre Dame Law Professor Douglass Cassell, who reportedly was proposed by President Barack Obama’s special envoy to the talks, Bernard Aronson.

Cassell had previously sued the Colombian government before the Inter-American Court for Human Rights on behalf of victims of a 1998 bombing of a village in northeastern Colombia that killed 17 civilians. The Colombian state lost that case.

The FARC have sought the inclusion of Spanish attorney and communist activist Enrique Santiago. He has become known as “the FARC’s attorney” in Colombian media.

This body of legal and human rights experts will try to find the compromise on transitional justice that Colombian President Juan Manuel Santos has called the last obstacle before a bilateral and definite ceasefire comes into place, marking the effective end of the war that has lasted since 1964 and cost more than 260,000 lives according to official estimates.

The negotiations between the government and the FARC have so far resulted in deals on what are widely considered the causes of the conflict, rural inequality and political exclusion, and on the FARC’s abandoning of drug trafficking, which has financed the guerrillas and fueled the conflict for decades.

If successful, the peace talks will end the world’s largest-running armed conflict after that of Myanmar.