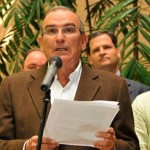 Solutions to drug trafficking and cultivation represents the third, and perhaps most internationally relevant, negotiation point in a six point peace process that started over a year ago in Havana, Cuba. Negotiators have already reached tentative compromises on the issues of political participation and land reform.

Drug trafficking and taxation, along with kidnapping ransoms, has been a principal means of financing for the FARC since the 1980s – although the rebel continue to deny involvement in the illicit trade.

Political analyst Fernando Giraldo told newspaper El Pais that this negotiation point offers an opportunity for the FARC to prove their seriousness about pursuing peace and to be “generous with the Colombian people.”

Security expert John Marulanda said that because of the massive amount of money involved in drug trafficking, the negotiation point may prove difficult to negotiate.

Humberto De la Calle, chief peace negotiator from the government, said that the eradication of coca in Colombia is an “objective not only important for [Colombia], but also the international community.”

“There will be no real end to the conflict without tackling this phenomenon at its roots, as we won’t be able to design a sustainable agrarian reform without solving the problem of the illicit drugs,” said De la Calle.

The FARC had already released a proposal that stemmed from failed peace talks held between 1999 and 2002 in which the guerrillas propose active rebel involvement in helping coca farmers move to substitute crops, while promoting investment in coca-growing region from countries with high cocaine consumption like the United States.