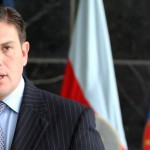 Colombia’s Defense Minister Juan Carlos Pinzon claimed that the government’s peace deal agreement on political participation with rebel group, the FARC, was a result of military triumph by the country’s Armed Forces over the guerrillas.

Governement and rebel negotiators in Havana, Cuba, reached an agreement aimed at creating a pathway for rebel fighters to participate in Colombia’s democratic institutions. The agreement constitutes the second agenda item out of a six part peace deal that is attempting to end the country’s 50-year-old conflict.

Pinzon at a speaking event on innovation in the military, said, “believe me that the men from the terrorist groups like the FARC said the road to political participation is nothing else that military victory for Colombia’s heroes.”

He said there must now be a method to “avoid humiliation for those who want to take the next step.”

Although Pinzon claimed the country would soon be in a state of peace, he stressed the importance of maintaining a large and well-funded military even after achievement of a post-conflict Colombia.