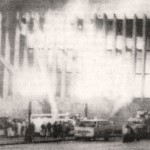 Colombia’s Prosecutor General Eduardo Montealegre announced Wednesday the opening of a multi-faceted investigation into the violent official response to the 1985 guerrilla takeover of the Palace of Justice.

Montealegre said the first line of a three-part investigation will focus on retired General Victor Delgado, the head of Colombia’s National Police at the time of the incident.

The investigation, he said, will also examine the roles played by authorities within the now-defunct Administrative Security Department (DAS) and the administration of then-President Belisario Betancur.

In 1985, the M-19 urban guerrilla group took over Colombia’s Supreme Court in Bogota, taking the judges themselves hostage and demanding that Betancur present himself to stand trial.

In response, the police and military raided the building, in a problematic operation that left 100 people dead, including 11 of the country’s 25 supreme court justices, and set the building on fire.

The details of the Palace of Justice siege have been marred in controversy and confusion since, and a series of court rulings have held the military responsible for the unreported “disappearances” of 11 civilians during the operation and condemned the Prosecutor General’s Office for failing to properly investigate the incident.

Former Minister of Justice Carlos Medellin, the son of a judge who died in the raid, told news agency Colprensa he backed the Fiscal General’s new investigation.

“Contrary to popular belief, neither the president nor the ministers of that time have been investigated,” said Medellin.

In October, the Inter-American Commission on Human Rights (CIDR) opened its own investigation into the matter, which could result in sanctions on the Colombian state for the government’s mishandling of the rescue operation.

MORE: Colombia to be sanctioned for 1985 Palace of Justice massacre