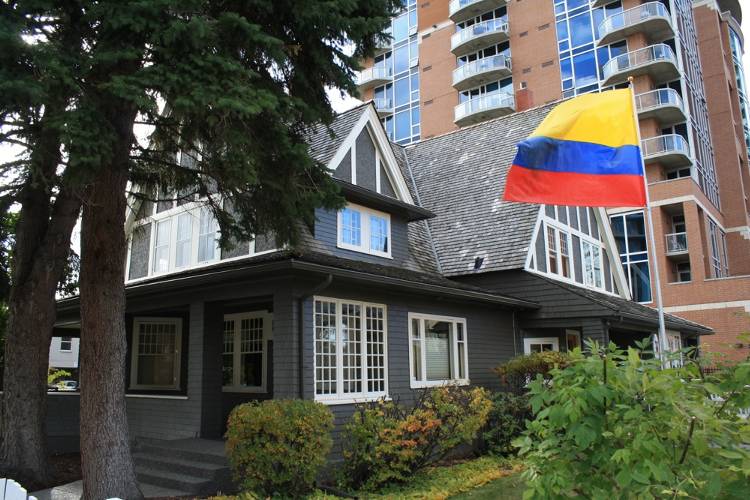 (CBC) Colombia’s Consul to Canada, Andrés Talero’s new office in the Beltline will provide services to the approximately 8,000 people from Colombia living in the city of Calgary and encourage business between the two countries.

Talero said the decision to open a consulate in Calgary reflects a recognition in Bogota that Canada’s economic centre of gravity has shifted westward.

“I have found that the Western hospitality motto is amazingly true,” said Talero, whose last posting was to Miami.

Colombian Ambassador to Canada Nicolás Lloreda Ricaurte said trade between Canada and Colombia has grown at a rapid pace since the two countries entered into a free trade agreement in 2011.

“Also Alberta is a very important trading partner and investor in Colombia. There’s a very large number of Alberta companies — oil and gas, services, many different services and manufacturing companies — that have a presence in Alberta.”

The consulate has set up shop in the historic Nellie McClung house at 803 15th Avenue S.W.

McClung, a political activist and author, was one of the so-called Famous Five who succeeding in having women declared ‘persons’ under Canadian law.

Speaking at a party to celebrate the opening of the consulate, Mayor Naheed Nenshi praised the government of Colombia for coming to Calgary, and for choosing the historic building.

“It is a tremendous statement of confidence in the relationship between this region and the great country of Colombia that the government of Colombia has made this effort to open this consulate, and for that we are deeply grateful,” he said.

“The fact that the consulate is in this place means an enormous amount to this community,” Nenshi added.

“Because this building was in an enormous amount of danger. We were very, very, very much at risk of losing this important piece of our heritage, this Nellie McClung House. And saviours come from places sometimes when you least expect them.”

Talero said the consulate will regularly open its doors to school groups so that young Calgarians can learn about McClung’s place in Canadian history.