Colombia once again ranked happiest country in the world: survey 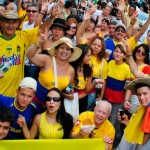 For the second year in a row, Colombia has topped the list as the world’s happiest country, according to a survey released Thursday by WIN-Gallup.

Over half, 58%, of respondents reported they would not change countries.

A majority of Colombians who would leave the country would choose Canada as a a new country of residence, according to the poll.

The poll also reported that 35% of Colombians were optimistic about the economic situation for 2014.

They also reported that 65% of Colombian believe the political situation could be improved with greater female participation in politics.