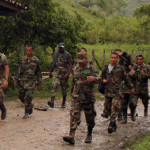 The Colombian Ombudman’s Office said Thursday that the FARC violated the month-long ceasefire despite a decrease in violence, according to Colombian W Radio.

According to the Ombudsman’s Office, the FARC, Colombia’s largest paramilitary group, is responsible for multiple acts of violence during the month-long ceasefire which started on December 15 and ended January 15.

The Ombudsman’s Office claim that the FARC is behind acts of harassment in the town of El Doncello, in the southern department of Caqueta, as well as the two bombings that occurred in Anori and Briceno, both in the state of Antioquia.

The Center of Resources for the Analysis of Conflicts (CERAC) issued a report claiming that the ceasefire has reduced overall violence by 65%. The number is compared to the 2012 ceasefire, which lasted two months.

The FARC has been negotiating a possible peace agreement with the Colombian government in Cuba since November of 2012. The first round of this year’s peace talks started on January 13 and is addressing the problem of illicit drugs in Colombia.