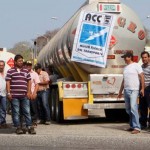 A community dispute in one of Colombia’s primary petroleum production centers has seen February production miss its goal of one-million barrels, according to the Colombian Energy and Mining Ministry.

At 997,000 barrels a day, last month’s production did represent an increase of 0.5% over February 2013, the ministry said on Tuesday night.

The ministry told the El Pais newspaper that the increase in production was achieved despite restricted production for two weeks at the Chichimene field in the central state of Meta, where social protests were eventually quelled by an agreement between the community and the government.

Despite the ambitious production levels, Colombia’s oil sector in the medium and  long-term continues to be dominated by the end of “the era of easy oil” in the country.

Only 7 years of oil reserves in Colombia

As Colombia’s Mining Minister Amylkar Acosta explained to the El Espectador newspaper last year, the prominence of natural resource exportation in the Colombian economy poses a looming problem, in that no new major reserves have been discovered recently. Though production has increased in recent years, Colombia’s long-term energy supplies are “extremely precarious,” he said.

According to the World Factbook, Colombia’s proved oil reserves as of January 1, 2013, were 2.417 billion barrels.

At this rate, barring a large new discovery, reserves will be exhausted in about seven years.

The effect on the balance of trade, should Colombia become a net importer, could be dramatic as roughly half of Colombia’s export income comes from oil and its byproducts.

Between January and July of 2013, Colombian exports amounted to $33.9 billion, according to the latest figures from the Colombian Ministry of Commerce, Industry and Tourism. Of this, $15.7 billion, or 46.3% of total export dollars, was from petroleum alone.