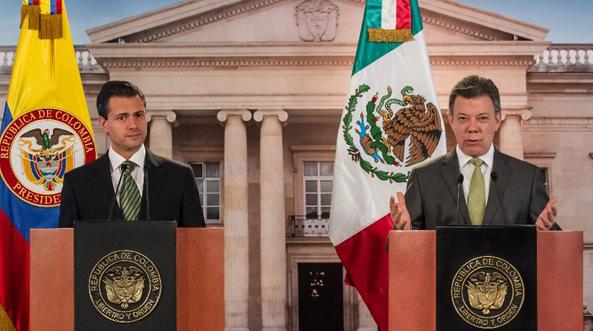 At a press conference, Santos and Pena Nieto stressed the need to strengthen the alliance, founded last June by Mexico, Colombia, Chile and Peru, to more deeply integrate their economies and develop new trade links with the Asia-Pacific region.

Santos said the bloc has been very important to the four members, allowing them to strengthen their ties with the Asia-Pacific region.

“The commitment is to support, back and accelerate the process of the Pacific Alliance,” said Pena Nieto, adding “the bloc can eventually be extended to other countries, both in Asia and South America.”

The two also reviewed important issues of common interest, including security and fighting organized crime, with Pena Nieto reiterating Mexico’s interest in “having the support and advice” of the Colombian government.

Santos said his country is committed to maintaining the relationship, because “cooperation is very necessary.”

Colombia is the second stop, after Guatemala, of Pena Nieto’s Latin America tour. The trip will also take him to Brazil, Argentina, Chile and Peru.

This is the first international trip of Pena Nieto after he won the July 1 elections. He will take office on Dec. 1.