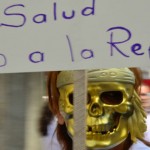 The protests started on Oct. 29th, and a week later the thousands of protesters are still in the streets determined to stop the healthcare reform bill before its passage into law.

According to the magazine Semana, the most recent marches across the nation were organized by the National Association of Interns and Residents (ANIR) and included representatives from healthcare workers, patients, students, unions and healthcare professionals, united in opposition to the proposed legislation, which they say would only serve to deepen the problems within Colombia’s troubled health sector.

ANIR President said the protests were calling for “the retirement of the reform, because the government wants to continue turning healthcare into a business.”

Protester’s central argument claims that the “reform,” is not actually a reform at all, as it preserves, and ultimately strengthens, Colombia’s intermediary payment system, known as “the EPS.”

In 1993, Colombia passed health care legislation installing the EPS, which is composed of numerous semi-privately held organizations that serve as intermediaries between medical providers and consumers to deliver health services, supposedly to maximize efficiency of taxpayer money allocated to healthcare.

Since institution, the poorly regulated EPSs have engaged in a myriad of problematic practices, creating bureaucratic barriers for treatments, withholding payments, and embezzling funds in areas not related to health care. ANIR claims the EPSs collectively owe Colombia’s roughly $2.5 billion in uncompensated coverage.

The problems with the EPSs are widely acknowledged and Santos’ healthcare reform purportedly aims to dismantle the ESPs, whose negligent behavior is threatening the solvency of medical centers across the country. However, the protesters contend this is not the true intended result of the poorly understood reform bill.

The protesting healthcare workers claim that the bill would only change the name of the ESP system, and that the newly proposed “Gestoras” system only serves to compound problems, as the “new” organizations would not be required to return excess funds received over costs of provided health services, essentially increasing the profits for their politically connected investors.

In addition to problems with ESP reforms, protesters contend that healthcare reform would threaten job security as it expands exploitative contract systems that provides inadequate payment and benefit compensation for healthcare professionals.

President Santos last week urged the Congress to take the bill moving through the House of Representatives into “urgent” consideration, saying that “the Colombian people are demanding that the [healthcare] system improve and that it improve rapidly.”

Medical intern and central protest organizer in Medellin, Colombia, Victor Correa told Colombia Reports that due to the magnitude of foreseen problems with the proposed bill, the protesters would continue to mobilize until the president’s reform is “knocked off the table.”