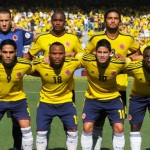 Colombia’s national soccer team has maintained its 4th place ranking as it prepares the 2014 FIFA World Cup in Brazil.

The team, under head coach Jose Pekerman, totaling 1200 points after playing friendly matched with Belgium and the Netherlands, sitting below only Argentina, Germany and Spain.

Colombia did not change rank after beating Belgium (2-0) and tying against the Netherlands (0-0).

While Spain maintained its lead, Portugal made the most dramatic recent change in ranking, rising 9 positions, following a victory over Sweden that secured the southern European country of a place in the 2014 World Cup in Brazil.