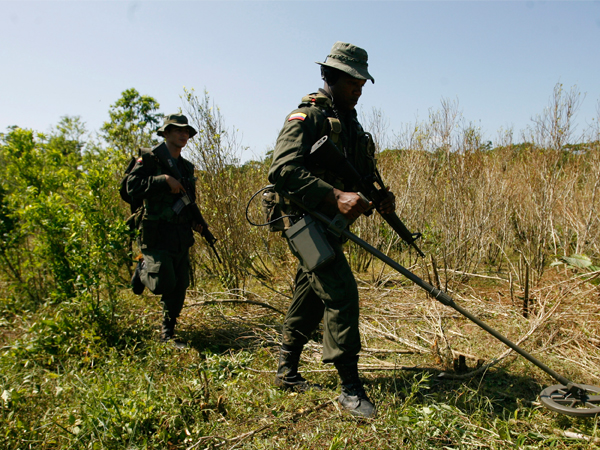 But his dream ended years before it had a chance to become reality, as Mendoza lost his legs while crossing a minefield planted by the Revolutionary Armed Forces of Colombia (FARC) in the city of Tame in the department of Arauca in 2010.

Mendoza, however, is walking again, thanks to the support of the government’s Presidential Program for Integral Action Against Landmines (PAICMA), which helped him get – and learn to use – prosthetic legs donated by the government.

“Now I’d like to be a pilot,” Mendoza said after thanking the government and private companies who supported his rehabilitation.

His mother, Ana Rosa Suárez, said that while rehabilitation was hard for the family and José had difficulty doing basic things at first, seeing him walk again has eased her pain.

“You can see that there’s still hope for his life,” she said. “Little by little, he has gotten used to his new life and doing things he couldn’t do before, such as going to the bathroom on his own.”

A total of 10,001 people, including 328 this year, have been injured or killed by a landmine in Colombia between 1990 to the end of September 2012, according to PAICMA.

Mendoza is one of the 958 minors who have been victims of landmines since 1990.

Through September 2012, 45 children were landmine victims, 11 of whom have died this year, compared to 44 all of last year, 9 of whom died.

On Sept. 22, a 4-year-old girl was killed while playing with a grenade she thought was a soccer ball in the Cañón de las Hermosas in the municipality of Chaparral in the department of Tolima.

“The injured children are still under observation,” Mosquera told reporters. “Their medical evaluation is being kept confidential, but we hope they’ll be better soon. The government undoubtedly will assist them throughout their recovery.”

There were 495 landmine victims in Tolima between 1990 and September of this year. Antioquia, with 2,228, was the department with the most landmine incidents, followed by Meta (985), Caquetá (776) and Arauca (546), according to PAICMA.

Police Officer Andrés Pérez, one of the first to arrive on the scene where the girl died, said explosive devices routinely are found in Colombia’s rural areas.

“The [FARC] leaves them scattered close to the schools or in areas where there are children,” he said. “Those of us who are fighting these criminals every day have become used to seeing the civilian population being utilized as a shield and becoming victims of the FARC.”

“The illegal armed groups must immediately stop the practice of spreading the Colombian fields with explosive devices or unexploded ammunition, which threatens the civilian population, especially young boys, girls and adolescents. They are the innocent victims of the conflict that’s going on in Colombia.”

Through PAICMA, 131 landmine victims in 17 departments throughout Colombia have received governmental assistance this year in the form of medical attention, prostheses, therapy and psychological help.

The government also had more than 700 speakers lecture the public – particularly in those departments where landmines are prevalent – about how to avoid becoming victims of landmines.

Meantime, 112 officers working in national parks have been trained by the government in landmine detection and in teaching prevention strategies to visitors. The officers also are taught first-aid techniques in case someone is injured by a landmine.

“These types of training are very important for us,” said Ernesto Piraquive, a forest guard in the department of Nariño. “They’re a way for us to warn children and adults so they won’t lose their life or limb because of a landmine.”