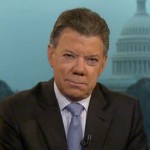 President Juan Manuel Santos said that Colombia is becoming the ‘darling of foreign investment’ on popular US morning talk show, “Morning Joe,” one day after meeting with US President Barack Obama in Washington, DC.

Santos said that that the free trade agreement (FTA) that went into effect May, 2012 between the two countries has helped Colombia become a financial leader in Latin America.

“Colombia has evolved…[and the country] is becoming the darling of foreign investment,” asserted the South American president.

Santos said that due in part to the US FTA, Colombia now has the highest investment rate of any country in Latin America and Colombia has created more jobs than any other Latin American country in the past three years.

The total trade between Colombia and the US amounted to $41 billion in March, 2013 — up 9.6% from 2011.  The news program explained that because of the FTA, US exports to Colombia are up 19% and near 1,300 Colombian firms are exporting goods to the US for the first time.

The president said that Colombia will be signing a deal with Microsoft later Wednesday about having a stronger presence in the country, and pointed out that Facebook and Google are already well on their way to establishing themselves in the country.

Santos also indicated that the types of business that are now coming to Colombia are tech based companies rather than the usual mining, oil, and natural resources firms.  He mentioned that this aligned with the government’s plan to provide internet access for the entire country.

The incumbent also recapped the other major theme of his trip on Morning Joe: peace talks with the guerrilla group, the FARC.

“We are advancing in the correct direction. We have advanced more than any other initiative or attempt to seek peace with these people [in the past],” said Santos.

“I am today, more optimistic than I was a year ago.”

President Obama and other political leaders praised and gave support to the now year-old dialogues during Santos’ trip to the US.

MORE: Santos heralds ‘near unanimous’ bipartisan support in US for Colombia peace talks

Colombia’s president added that he was happy that his conversations with US leaders currently do not just revolve around “drugs and how to combat violence and terrorism, but [now also] technology, education and how to work together helping other countries…with problems we have had in the past.”

Santos said that he and Obama only disagreed on one topic: which country would be more successful in the World Cup in Brazil in 2014.

“I hope that [Colombia and the US] don’t meet in the first round, because we will have to, I’m sorry to say, eliminate the US very early,” said Santos.

Colombia’s national soccer team is currently seated 4th in FIFA’s world rankings, while the US team sits at number 14.