(INFOSURHOY) INÍRIDA, Colombia – An ambitious education project for young people and adults is being carried out in Guainía, a department in the northeastern Amazon rainforest that has one of Colombia’s highest dropout rates.

Of every 100 children who enroll in school in Guainía, only 11 finish high school, according to the department’s Ministry of Education.

The project, which mixes indigenous traditions and technological tools, has distributed 3,600 tablets to young people and adults.

A total of 98% of Guainía – 72,300 km2, nearly twice the size of Switzerland – is an indigenous reserve and constitutes one of the largest forest reserves on the planet. Its population is about 42,000, most of whom are indigenous living in small communities on the banks of the Inírida and Guaviare rivers.

To reach Inírida, the department’s capital city, travelers have to take a 75-minute flight from Bogotá, or travel along the Guaviare River for 7-10 days, depending on the vessel.

“It’s like an island in the middle of the jungle,” said Camilo Puentes, Guainía’s tourism coordinator. 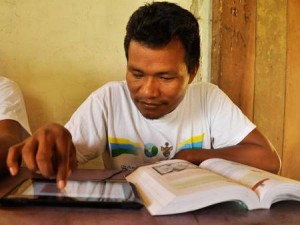 René López studied until the ninth grade in Caranacoa, which is 40 minutes from Inírida by motorboat, but he didn’t finish high school. Through the Transformemos project, he’ll be able to earn his degree without leaving his community. (Juan Carlos Rocha for Infosurhoy.com)

Formal education is a recent introduction, which few adults have experienced.

The challenge of launching an educational project in this context was by no means easy, which is why the initiative is headed by the NGO Transformemos.

Transformemos received a United Nations Educational, Scientific and Cultural Organization (UNESCO) Confucius Prize in 2012, which provided global recognition for the “Transformemos Educando” interactive system. The initiative has provided education to about 300,000 young people and adults in 14 regions nationwide, including many marked by poverty and violence.

In Guainía, the mission began in April, when the coordinator of the project, Omar Bustamante, settled in Inírida.

“Our idea is to teach concepts that are applicable to daily life in these communities,” Bustamante said. “We have to speak on their terms, based on their reality. I spent months with grandparents, wise elders, community leaders, anthropologists, teachers, writers and travelers, who provided the pieces to this complicated puzzle.”

One of the first findings – and the first hurdle – was the diversity of languages. Many of the adults targeted by the project spoke only basic Spanish and the young people were ashamed to speak their native language.

“The traditional wisdom is being lost with the death of each grandparent,” said Kelly Palacio, the department’s secretary of education. “If we want to rescue the indigenous customs, this is a decisive moment. That’s why we decided to carry out the project using traditional languages.”

The tablets feature interactive software that uses the region’s four most common indigenous languages – Puinave, Piapoco, Curripaco and Sikuani – as well as Spanish. 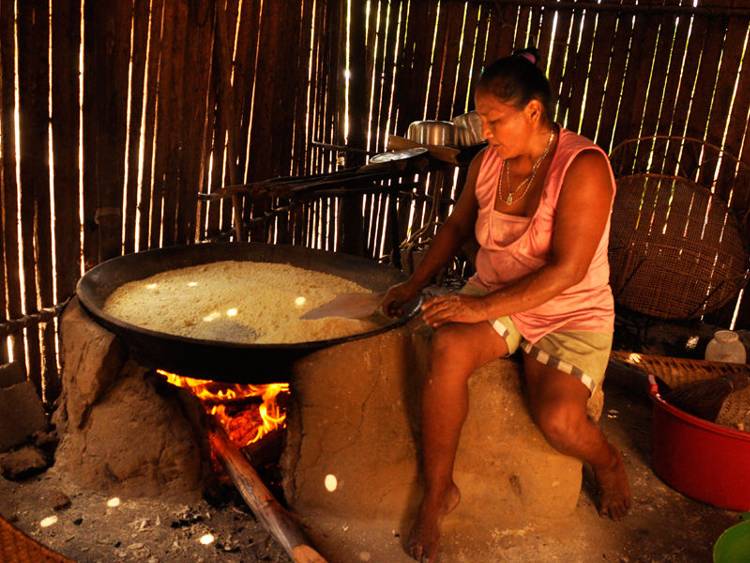 During the research phase, the community provided information, pictures and videos that were included in the booklets and software, strengthening the bond between the students and the material.

That’s how now they learn to count with Inírida flowers, a symbol of the region; they watch videos featuring the Mavicure Mountains, a natural wonder of Colombia; or the breeding of lapas, mammals that are hunted in the region.

Students also read about endangered animals or passages from La Vorágine – a novel by Colombian writer José Eustasio Rivera that takes place in Guainía – and receive instructions on how to handle the civil registration and identity card processes, or apply for tutelage, a law that protects their rights.

The radio station run by the Colombian Navy in Inírida temporarily set aside their pro-demobilization broadcasts targeting guerrilla fighters and spent months recording sessions in indigenous languages, with the participation of leaders from each ethnicity.

The recordings were sent to the headquarters of Transformemos in Bogotá, where a team of professionals incorporated them into the 264 interactive sessions that were used in educational materials.

At the same time, a call for teachers was issued, which brought together 144 people from Inírida and the surrounding communities. Their first task was to make house-to-house visits, seeking out young people and adults interested in studying.

“A lot of them weren’t the least bit interested, but the tablets drew them in and when the news got out, people started coming to us to sign up,” said Luis Darío Cepeda, a teacher at the Francisco Miranda School in Inírida.

Indigenous community members, mothers, grandmothers, soldiers and even prisoners signed up for the program, which began in June.

“The first goal, which was to enroll 3,600 people in the educational system and provide them with materials, has been achieved,” Bustamante said.

In Caranacoa, a community 40 minutes from Inírida by motorboat, 117 out of 240 residents signed up for the Transformemos project.

The program’s modules, which are defined according to the knowledge of each individual student, rotate through school classrooms, the church and the patios of some homes.

Edgar Oleriano is the teacher in charge of the first module, which takes place at the church in Puinave. There are only a few students in the morning, most of them mothers with their children, some held in their arms, others scurrying about, while the adults learn to read and write. 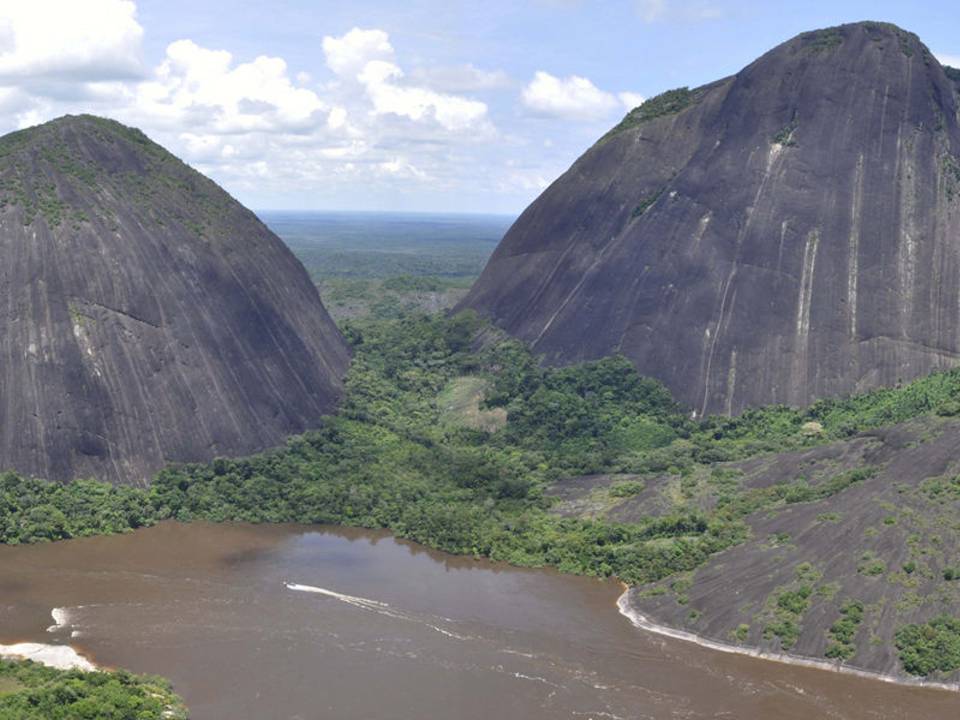 The Mavicure Mountains, one of the most dazzling natural wonders of Colombia, are included in the lessons. (Juan Carlos Rocha for Infosurhoy.com)

All of the men missed the class, as it was prime fishing season.

“The men will come after the river rises to learn how to sell their fish,” he said. “How many did I catch? How much do they weigh? How can I sell them in Inírida? We apply mathematics to their daily lives.”

Another module is being carried out on the patio of someone’s home. The majority are young people who haven’t completed high school. In the computer class, they are working on an audiovisual project to document the preparation of manioc, the main source of nutrition for Guainía’s indigenous.

“We want to show the process of preparing casabe and mañoco, recording it with the tablets,” teacher Hermes Fredy López said.

However, as the months passed, the levels of student attendance have declined.

“The students work, they have to look after their conucos (traditional Amazonian farms), take care of their families and meet their commitments to the church. We have a lot of competition,” Bustamante said.

But to increase community interest, project officials are working on a book that compiles the traditional medicinal knowledge of the indigenous, for whom the jungle is a pharmacy.

“We can’t forget that we work with adults who know much more than the concepts that are formally recognized by the educational system,” said Roberto Ardila, the director of social development at Transformemos.