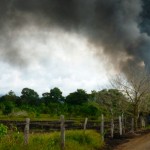 A Friday meeting between the U’wa community, the Minister of Mines, and other senior officials in Norte de Santander ended without agreement, reported national media, leaving no resolution to the ongoing pipeline closure.

Minister of Mines Amylkar Acosta, the president of Ecopetrol, and the Minister of the Interior traveled to the eastern border state of Norte de Santander Friday to try and reach an agreement with the A’wa tribe, who have blocked repairs to Colombia’s second most important oil pipeline for over a month, reported El Tiempo.

The Caño Limon pipeline was damaged in a suspected guerilla attack last month, and the current blockade is halting the production of 2.2 million barrels of oil per month.

As a result of the closure the government has lost over $136 million in royalties, taxes, and dividends.

During the 8 hour meeting, the U’wa not only sought restitution for the environmental and cultural problems they claim have been caused by transportation infrastructure, but also demanded that all oil exploitation projects be removed from their territory.

According to Caracol Radio, U’wa leader Yimmy Aguablanca, said “We are willing to continue the dialogue, but will not stop the mobilization of our people [against] repairs to the Caño Limon Covenas until [the government] actually moves forward with agreements that guarantee the economic and social of the U’wa people .”

The U’wa are one of Colombia’s most active indigenous groups in defending their traditional rights and customs, and have opposed oil exploration and drilling on their land for decades.

The group once even threatened mass suicide if Occidental Petroleum (Oxy) continued drilling projects, according to the 1998 Goldman Environmental Prize citation of the protest leader, Berito Kuwaru’wa.

MORE: Over 40 of Colombia’s indigenous groups close to extinction due to mining: UN

Non-withstanding previous constitutional court rulings in favor of the U’wa, national and international oil companies have continued exploiting territory that the indigenous group claims is theirs, and protected by law.

The Venezuelan dictatorship has caused a geopolitical mess in recent weeks...
Read more