Colombia in the throes of a revolution 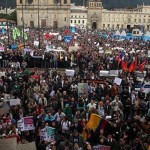 An oligarchical political class have governed Colombia for 200 years, but their time is up. The touch paper was lit long before this week’s coup against the democratically elected Mayor of Bogota, Gustavo Petro; but the sacking of this demobilized guerrilla may well be the act that makes change inexorable.

Removed from office – and banned from politics for 15 years- for fouling up the nationalization of Bogota’s garbage collection (yes, really), Petro has been overnight transformed from incompetent leader into martyr.

Bogota’s Plaza de Bolivar is Petro’s Tahrir Square. From the balcony of the mayoral palace on the western flank of the plaza, Petro calls on the gathered masses to rise against the “fascists” who run Colombia. Hyperbolic, yes, but Petro has struck a sustained chord in a growing symphony of discontent.

18 months ago a hastag brought down a law the Santos Government had spent two years pushing through congress. #Noalareformadejusticia took a mere 24 hours to strong arm the president to veto a reform he had just days before claimed was emblematic of his transformative administration.

Eight months prior, Santos had been forced to shelve another of what he would call “flagship policies”; the education reform bill. Universities went on strike, and students, lecturers, and just about anyone who had passed through public education, marched on Bogota. An education minister was humbled, Santos promised to “listen” to students, and the law was quietly ditched.

And more recently, in August, the entire country appeared to grind to a standstill as potato, coffee, milk, rice, and sugar farmers combined with truck drivers to block the nation’s roads and shout and scream at the government not to forget a rural Colombia on whom 50 per cent of families are dependent.

Farmers, driven to ruin by decades of under-investment in infrastructure and a series of disastrous macro economic policies pursued by consecutive governments, had finally cracked.

Santos, with all the deftness of touch of Marie Antoinette, spent a week pretending the protests didn’t exist (yes, his words). The following Friday he was forced to militarize Bogota, and promise a new “agriculture pact” to curb the unrest.

Poor old Juan Manuel Santos, as posh as Queen Elizabeth’s butler, had not expected his time in office to be so turbulent. His ivory tower predecessors had managed to keep the barbarians away from the gates, out of sight and absolutely out of mind.

Santos had hoped to carry on from where his forefathers had left off. You see it is not political parties that compete for power in Colombia, but instead altoo often, families. Colombians talk of “los mismos de siempre” to refer to the dynasties who have shared the trappings of power throughout the generations. Just look at the names in power today, and see how many carry the same as those who ruled around 30, 40, 50, 60 years ago… It hasn’t much mattered what you do when in power, when you’re safe in the knowledge that the reigns will be passed on to your son, or cousin.

The divine right of kings may have gone out of fashion in Europe before Colombia was born, but this Andean nation remains a republic whose rulers believe it a viceroyalty.

The bad news for Santos is that the age of regal decadence is in its death throe. This is the moment of the global “indignado” movement, and of internet revolutions; and Colombians are beginning to believe now is the time to show their masters who is really boss.

Off with the heads, then, of those the indignados claim have ensured Colombia, a country of unparalleled riches remains a nation of almost unrivaled inequity.

Gaitan, Pizarro, and Galan were all killed in their attempt to scale the palace walls. And Gustavo Petro, the first far left politician to reach the citadel, was this week handed a political death sentence, forced to sit on the sidelines for 15 years.

But the legacy of Petro, a dreadful and arrogant politician, could yet be the fast forwarding of the advent of government of and for the people.

With less than 30 per cent of Colombians supporting President Santos’ re-election bid, the conditions are perfect for a coup against the traditional political class.

Over to you, the 47 million souls of this land.

The post Colombia in the throes of a revolution appeared first on Colombia News | Colombia Reports.