(Narco Legacy In Colombia) By the time he died, Colombia’s biggest drug lord, Pablo Escobar, had managed to amass a huge fortune.

He left behind many properties including buildings, mansions and estates as well as private planes, helicopters, luxury cars, jewelry and expensive paintings.

But perhaps the greatest eccentricity he acquired in his life was a zoo, home to some 1,200 exotic animals from all over the world, including elephants, ostriches, zebras, camels, giraffes and hippopotamuses that he kept at his private ranch, Hacienda Napoles, in the heart of Colombia.

The animals were smuggled into the country aboard Escobar’s drug planes in 1991.

After his death in 1993, most of the animals were transferred to zoos around the country, except the hippos. Four hippos — one male and three females — were left because they could not be captured and transported.

Thousands of kilometers away from their habitat in Africa, the hippos started to breed freely in tropical Colombia.

Three decades later, they have left Hacienda Napoles and spread out some 100 miles east of the city of Medellin in the Antioquia department, dispersing around the Magdalena River basin as their population continues to grow steadily. 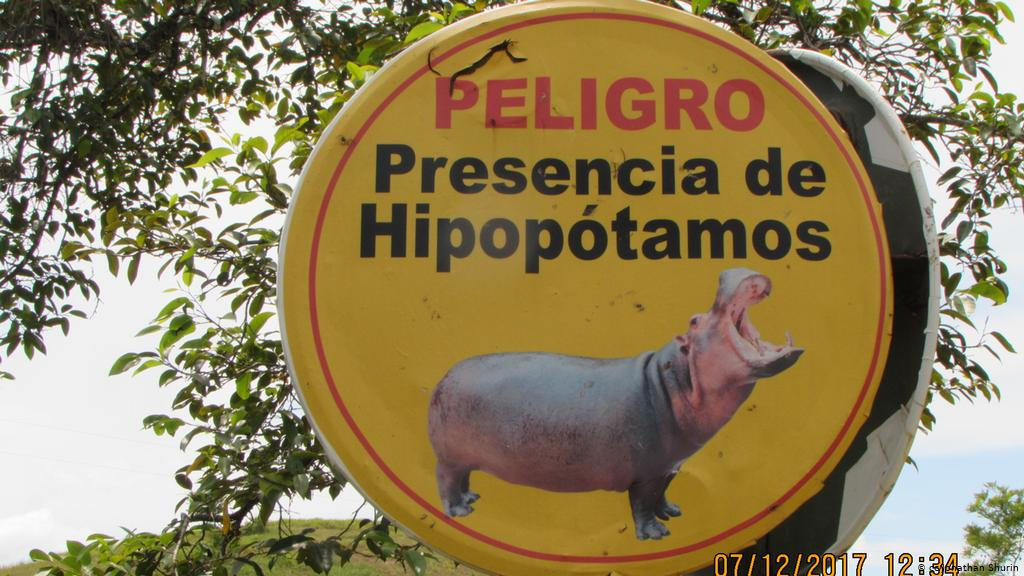 Isabel Naudin is the medical director of Animal Balance Latin America, an NGO that focuses on controlling animal populations without culling them. She works to raise awareness in the community to care for and respect these animals foreign to the country’s wildlife.

“At the beginning, the people who saw them were scared of hippos,” Naudin told Anadolu Agency. “Many didn’t even know what kind of animal it was because they had not seen anything like that in their lives.”

Although there is no available data, Naudin says there appears to be 80 to 100 specimens in the country. In 10 years, there could be 150 hippos, according to a recent study by Instituto Humboldt, a biodiversity research institute. And Colombian authorities do not quite know what to do with them.

Many scientists say the Colombian hippos should be culled because they are unbalancing the ecosystem, competing with native wildlife and polluting local waterways. And without natural predators like lions or crocodiles, human control, extreme drought and hunting, experts say they will keep reproducing rapidly. Not to mention the hippo is considered one of the most aggressive animals in the world.

Yet Naudin says that although they do not belong to the Colombian territory, they have been there for a long time.

“The territory occupied by the hippopotamuses has already been modified by humans,” she says. “There is no official report that they are displacing native species. In fact, there are studies that suggest that the impact of hippos on the environment is similar to that of the cattle that graze in the same area.”

Locals such as Isabel Romero say that the species has brought more benefits to the region and that they enjoy living with these odd neighbors.

“They are the guardians of the river and they prevent fishermen from fishing with dynamite,” says Romero.

“They have introduced nature and river tourism to the region, bringing economic abundance. The truth is that cattle, mining and deforestation are bigger threats than these animals that pass in front of our houses wagging their tails.”

Animal Balance advocates to save their lives, contrary to what most experts recommend. Naudin says the best alternative is a birth control plan that consists of injecting them with a sterilizing chemical.

Yet, sterilizing these huge animals is no small task because they can stay in the water for hours, and tracking them can be a challenge. This is an expensive process, and all responsible entities claim they do not have the resources to do it.

While the experts are mired in this discussion, the hippo population keeps growing at an unprecedented rate — a problem that few want to tackle because the solution, whatever it may be, will be radical and highly unpopular.