In an interview with Caracol Radio, Palomino said that Mexico “requested” Colombian experts in catching high profile drug lords “to help them with an orientation on how to locate and recapture this elusive criminal.”

According to the chief of police, Colombia granted the request to help the operation that resulted in the third arrest of the world’s most prominent narco. 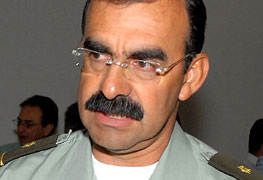 “Because of this we also celebrate the achievement,” Palomino said.

El Chapo was arrested in Mexico over the weekend, six months after he escaped his top-security prison.

The police chief, whose institution is under enormous pressure over alleged sex scandals, high-profile corruption and disappointing crime statistics, took the opportunity to boast his country’s successes in the arrest of Colombian drug traffickers abroad.

As a consequence, said the police chief, “the international community knows that when it needs assistance, an orientation, [or] a recommendation,” it can count on Colombian support.

However, before Guzman’s second arrest in February 2014, Naranjo had returned to Colombia to become part of the administration of President Juan Manuel Santos.

El Chapo, the leader of the feared Sinaloa cartel, has far-stretching ties to Colombia’s underworld. The Mexican cartel is suspected of buying almost one third of Colombia’s total annual cocaine production of more than 500 tons.