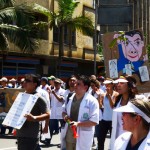 Health reform will not make it out of Colombia’s House of Representatives before the session closes on December 16, leaving the vote on the proposed legislation pending until next year, according to local media.

The health reform, President Juan Manuel’s personal project aimed at fixing the impending insolvency of clinics and hospitals across the country, has met considerable resistance from medical workers, who say the reform will not achieve its purported goals and does not address the root of the problem: corruption.

Central to the controversy is a system of semi-private health intermediaries (EPSs) that function in between patients and doctors, allocating services to patients and reimbursing clinics and hospitals for the services they provide. The EPSs, mired in bureaucracy and corruption, have mishandled public  funds, denied necessary services to patients, and have failed to pay hospitals in timely manner for services they have provided.

According to newspaper El Tiempo, the hospitals and service providers are owed a total of $7.4 billion by the EPSs, threatening the insolvency of at least 5 hospitals in the near future.

Minister of Health Alejandro Gavira said to Vanguardia that the health reform will resolve hospital debts by creating a new government agency called Salud Mia and changing the structure of the EPSs. According to Gavira, under the reform, those EPSs which can pay off their debts to the hospitals will be restructured into Health Manager organizations that will still allocate services to patients, but rather than managing public funds, will defer to a new government organization, known as “Salud Mia,” to make payments to the hospitals.

Medical workers in opposition to the legislation reject the assertion that Salud Mia would solve the problems of the country’s health system. They argue that by leaving health administration in the hands of government bureaucrats and businessmen, the sector remains “open to bureaucracy and corruption,” criticizing Salud Mia for not requiring adequate medical sector representation.

Gavira in response to the opposition said to El Pais that Salud Mia would be transparent and accountable and “under the magnifying glass” of the public.

Medical workers also criticize the bill for changing the law, creating a mechanism for politicians and governors to appoint hospital administrators, which they say will lead to increased bureaucracy and mishandling.

Reported in El Colombiano, Colombia’s Association of Clinics and Hospitals (ACHC) sent a letter recommending adjustments to the health reform bill as “maintaining the status quo is impossible” while the health sector is “assuming the consequences of other poorly run agencies.”

ACHC called on the prohibition of vertical integration of Health Managers or government organizations over health clinics and hospitals, instead calling for democratically elected health councils to direct the country’s health service networks. They also said that health managers should not decide the services provided to patients and should not be able to keep surpluses while managing public funds.

They recommended selection process of hospital managers be based on a balance of “labor stability, meritocracy, and ability to govern.”

Health reform on hold until 2014

Congresswoman Gloria Diaz told Prensa Latina that the time left in the 2013 legislative session was not adequate to finish the debate and vote on the reform. It will be seen if they open special sessions or if the reform is left on the table until March of 2014, just in time for congressional elections.

House of Representatives president Hernan Penagos welcomed the delay, saying the extra time will afford an opportunity to make changes to address some of the issues with the president’s health reform bill.