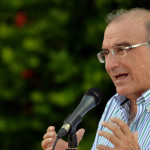 The government framed a future peace process as a chance for Colombia to remedy a problematic system.

De la Calle assured that these agreements would give Colombia the opportunity to reform their elections in order to “secure the roots of peace [in the country] and end the armed conflict.”  This represents a great chance to “amplify, modernize, and strengthen our democracy to make it more robust, more participatory, more pluralistic and more transparent,” said the negotiator.

“[So far] the agreements have taken into account all things related to the essential rights of a democratic state,” responded De La Calle to those who have accused the peace talks of cutting corners with democratic principles.

The first category discussed guarantees for opposition supporters to be able to participate fairly and justly in politics.  This included recognizing the role of social movements, mechanisms for social protest, and security for all who wish to speak out against the government or anyone else in the political sphere.

De la Calle made reference to establishing a new system to exercise security for those who are participating in opposition politics and stated that they government will be more vigilant in bringing those who make threats to politicians to justice.

“It is not just a tool.  It is a conjunction of new values in the name of security,” the negotiator said.

The second category said there will be large revisions of the current electoral system that will “invigorate more political participation and strengthen citizen involvement,” claimed De la Calle.

According to the government’s negotiator, “The foundation will remain the same, but the application will limit the amount of methodologies of assigning congressional seats.  This would open up enormous space and opportunities for political parties to…acquire valid political expression.”

The final category looked at larger electoral reforms concerning the organizations that run the elections and transparancy with regards to political finances and votes.

De la Calle made reference to “special territorial peace districts,” which instantly ignited a public debate amongst media outlets of what exactly that meant.  The negotiator emphasized that such peace districts will not mean exclusive congressional seats for the FARC.

“[These peace districts] will not be created to promote the FARC’s representation in congress, but rather to increase the political participation within the legislative branch of those who were most marginalized by the armed conflict,” claimed De la Calle.

The negotiator repeated that these districts are for “victims, farmers, women and social sectors,” and that allegations that they are just for the FARC are simply “false.”

De la Calle concluded by adding that the only way that any of this will be possible is if the FARC agrees to demobilize. He is hopeful that if all of these terms are met, Colombia will have a “lasting peace.”

Last Wednesday, the government and the FARC signed a deal on the subject of political participation.

Ongoing peace talks between the delegations will reach their one year anniversary on November 19. The next agreement, the third of six, will define terms of a cease fire between the rebels and the government.