Colombia Gambles on Talks With the FARC 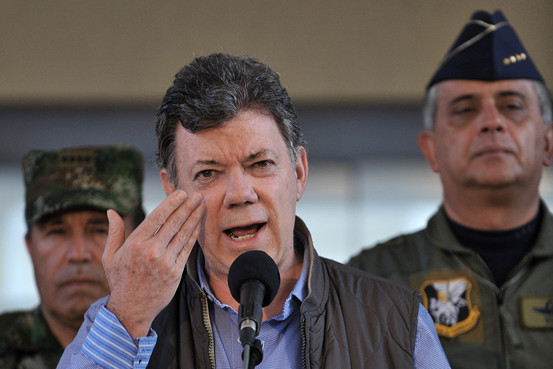 President Manuel Santos seeks an end to five decades of terrorist violence.
The question is, at what price?

No one I know of has ever calculated the net present value of future cash flows from the drug-trafficking activities of the Revolutionary Armed Forces of Colombia (FARC). It would be a good number to have as Colombian President Juan Manuel Santos embarks on the fourth attempt in 30-some years to reach a peace accord with the legendary terrorists.

Getting the FARC to renounce organized crime will be crucial to a successful outcome. That implies a buyout.

The news that the Santos administration has been engaged for more than a year in secret talks with the FARC was leaked to the press on Aug. 27. That prompted the release of a three-page document, signed Aug. 26 in Havana, spelling out the issues the two sides have agreed will be on the table when they meet in Oslo in October. These include political participation, an end to conflict and solving the problem of drug trafficking. Cuba and Norway are to provide the venues for the talks, with Venezuela and Chile as observers.

The national reaction to Mr. Santos’s efforts to reach a settlement with the FARC has run the gamut from hope and enthusiasm to suspicion and downright rejection. A recent poll by Ipsos Napoleón Franco found that 77% of Colombians approve of the president’s decision to open talks.

But key opinion makers, including former President Alvaro Uribe, are not so eager to proceed. Many ask why the government should negotiate with Marxist criminals who have not put down their weapons, still hold kidnap victims and continue to murder civilians. To further illustrate its lack of good faith, the FARC recently released a rap video that appears to taunt Mr. Santos. It asserts that he was forced to ask for the negotiation because he could not prevail militarily.

All of this demonstrates the magnitude of risk that the Colombian president is taking. FARC land mines are everywhere.

That a majority of Colombians are open to the outreach for peace isn’t surprising. The nation is weary of more than five decades of guerrilla violence, and Mr. Santos earned its trust as Mr. Uribe’s defense minister from 2006 to 2009. During his tenure he proved to be a brilliant military strategist capable of hitting the enemy decisively. His government says that it has eliminated the FARC’s top two leaders and killed or captured 18 other commanders.

It is therefore hard to buy into charges that the president has gone soft on terror. Mr. Santos knows better than anyone that if he does not secure a full FARC capitulation, it will use “peace” to ratchet up war. When Mr. Uribe’s predecessor negotiated with the rebels, they used a government-sanctioned safe haven to stockpile weapons, hold kidnap victims and plot attacks.

In a telephone interview last week from Bogotá, the president told me that the rebels approached him about talking, and he felt a responsibility to pursue the possibility of peace because even in its weakened state the FARC will menace the population for years to come.

Mr. Santos said he made clear from the start that there would be no safe haven and no bilateral cease-fire. He also said that any negotiation would last months, not years and that private property, military operations and state policies, like taxes, are nonnegotiable. His negotiating team of five includes a former police chief, a former armed-forces commander, and the president of a chamber of commerce, all pillars of the democratic community.

Considering all this, the process sounds safe enough. Yet there are also many reasons to be wary, especially with the involvement, however passive, of the Cuban military dictatorship.

One legitimate concern for those who know the FARC is the Santos-sponsored “law for restitution of land” passed earlier this year. It opens the door to lawsuits by individuals who claim that they lost property in the conflict at gunpoint and puts the burden of proof of how land was acquired on the current owner. There is also a new promise to compensate victims of human-rights violations perpetrated by parties other than the state. State crimes were already covered.

Both appear to have been done to smooth the negotiations by ensuring the FARC and its operatives, who are sworn enemies of many large landholders and have long coveted their property, that they can make their way into the courts.

But Colombia’s justice system is unreliable, and left-wing nongovernmental organizations have repeatedly demonstrated their skill in dredging up bribed or intimidated witnesses to win cases. What good are military victories on the battlefield if the terrorists are able to use the legal system to seize property, force huge government payouts, and destroy the lives and livelihoods of the armed forces?

Talking to the FARC may well turn out to be a triumph of hope over experience. But given the long history of bloodshed, the FARC offer was one Mr. Santos could hardly refuse, even if it only proves that, short of a FARC surrender, there is not much a modern liberal democracy has to talk about with the drug-running Marxists.