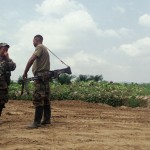 Colombia’s Defense Ministry and National Army will have to pay more than $1 million to the families of seven men who were murdered in 1996 by legalized militias, ruled the country’s State Council on Wednesday.

According to the ruling, the army should have but failed to act against the so-called Convivir paramilitary group that forcibly disappeared and presumably assassinated seven men in the village of San Roque, Antioquia.

According to investigations, the seven victims were forced to leave a bus traveling between the towns of San Roque and Puerto Berrio. The multiple cases of  forced disappearance and presumed homicide were part of a “social cleansing” campaign employed by the self-defense groups to cleanse society of individuals deemed unwanted.

The victims’ bodies were never found.

While the attorney of the military claimed the responsibility of the crimes were with the group that perpetrated the forced disappearances, the council ruled that the army failed to comply with its obligation to protect citizens from other armed groups.

Additionally, the authorities failed to adequately investigate the disappearances.

The Convivir were legalized in by the administration of former President Ernesto Samper in 1994 as a means to allow citizens to defend themselves against guerrilla groups like the FARC and ELN.

The militias were banned again in 1997 after links were proven between the legal vigilante groups and illegal paramilitary forces that formed the AUC in the year the Convivir were banned.