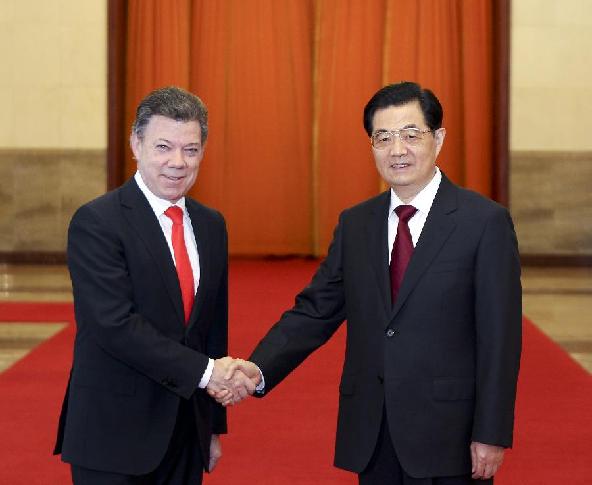 Chinese President Hu Jintao (R) shakes hands with Colombian President Juan Manuel Santos during
a ceremony welcoming Santos’ visit to China at the Great Hall of the People in Beijing,
capital of China, May 9, 2012.

Colombia’s economy could see Asia- like growth of 6 percent to 7 percent “for decades” if the government strikes a peace deal with rebels in soon-to- begin negotiations, Finance Minister Mauricio Cardenas said.

An eventual deal with guerrillas of the Revolutionary Armed Forces of Colombia, or FARC, could open the country’s eastern plains to Brazilian-style agribusiness, and divert tax revenue from security and defense spending to more productive uses, Cardenas said in an interview in his Bogota office.

“My bet is that if anything is going to grow faster in Colombia with the end of the conflict, it’s going to be agricultural production,” the 50-year-old Cardenas said in an interview 17 days after being sworn in as finance chief. “We’re talking about palm oil, soybeans, rubber, sugarcane, things like that.”

The FARC surprised many Colombians Sept. 4 by agreeing to sit down with President Juan Manuel Santos’ government next month, in Oslo, for the first talks in a decade aimed at ending Latin America’s longest-running armed conflict. A U.S.-funded crackdown has already improved security for oil and mining companies across much of the Andean nation, helping lure record foreign investment that’s allowed Colombia to overtake Argentina as South America’s second-biggest economy.

While a peace dividend would spur growth and investment even further, the economy can still grow at an “outstanding” long-term pace of 4.5 percent to 5 percent even if the talks fail, Cardenas said.

“I don’t want to give the impression that our success and the good momentum of the Colombian economy hinges on good results in that process,” said Cardenas, who served as Santos’ mining minister before switching jobs as part of a Cabinet shake-up. “It would be a nice thing to have, it will add to economic growth, but we already have outstanding economic growth.”

The FARC have been waging war on the Colombian state for nearly five decades, leaving large parts of the Andean nation off-limits for investors.

Agriculture has been held back more than energy and mining by the guerrillas, since oil facilities are more localized and easier to protect than farms, Cardenas said.