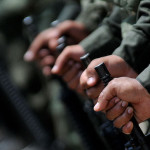 Colombia’s government on Wednesday unveiled a plan to invest $2.6 million in order to provide  security for political candidates in congressional and presidential elections held in March and May respectively.

UNP director Andres Villamizar told national radio that “we’re talking ab0ut an additional expense than the norm of the Unit, of about 5 billion pesos, partly supported by the National Protection Unit, but also by the National Police which is providing a large number of men.”

The additional security measures will be active until March 9 for the candidates for congress, and continue for presidential candidates until after a possible second round in June.

Colombia’s March congressional elections and May presidential elections are being prepared as the administration of President Juan Manuel Santos — himself seeking reelection in May — are holding peace talks with the largest rebel group, the FARC.