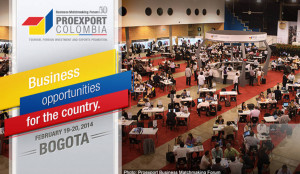 Due to the effort Proexport Colombia accomplished to promote international tourism toward Colombia, it was able to double the number of foreign wholesalers who offer the country among their destinations, increasing from 387 in 2010 to 848 in 2013.

This is according to the statement issued by the President of Proexport Colombia, Maria Claudia Lacouture, and she indicated that this benefits 150 thousand travel agencies distributed throughout Asia, America, Europe and Oceania, which offer their clients the unique experiences of the country.

To achieve this coverage, the organization has implemented a strategy of tourism promotion which involves participating in Trade Shows, trainings, printed guides, business conferences and Business Matchmaking Forums. This way, it went from promoting the country in 16 countries in 2010 to 34 countries in 2013.

According to Lacouture, during the same period (2010-2013), there has been similar progress in the number of national business owners – supported by Proexport Colombia- who offer the destinations of the country abroad, because in the leisure segment, the rating doubled climbing from 253 to 507, while in the corporate niche, it tripled, rising from 46 to 150.

Proexport Colombia has innovated in the way of promoting the country as a tourist destination, and since April 2013, it launched the campaign “Colombia is magical realism” which has been presented to 9,100 tourism business owners from 87 different countries.

The campaign, which currently has 11 posters, 4 commercials and 11 testimonials in English, Spanish, Portuguese, French and German, has impacted 1.316 billion people around the world.

The videos from Colombia.travel which can be seen on YouTube have been viewed more than 7 million times since they were launched.

Similarly, the organization has shared the tourism potential of Colombia in new countries, such as India and Israel, in which it stresses the patrimony of Cartagena and the Coffee Cultural Landscape, and has promoted alternative niches (religious tourism, eco tourism and scuba diving) in Spain, Argentina, Mexico, Germany and Chile, some of the countries with the largest number of travelers to Colombia.

In addition to promoting leisure tourism, the country has progressed in the segment of corporate tourism. It’s progress was even recognized by the International Congress and Convention Association, an organization which develops a yearly ranking, which calculates the congresses and conventions hosted by 109 countries.

One of the great achievements in this sense will be to host the 2015 General Assembly of the World Tourism Organization, to be held in Medellin.

Likewise, in 2013, Cartagena hosted the Annual Conference of the Florida Cruise Association, an event which brought together more than one thousand executives who not only spoke about the future of the industry, but who were also permitted to discover the options which the Colombian ports offer for the cruise consumers.

2014 will be a year in which we will be able to confirm the capacity of Cali, Bogota, Medellin, Pereira, Cartagena and Bucaramanga, among other cities, in matters of corporate tourism, given that the country will host a number of large magnitude events; an example of that is the assembly of the International Networkers Team, a corporate group from Puerto Rico, which is expected to draw 8,500 people to Bogota.