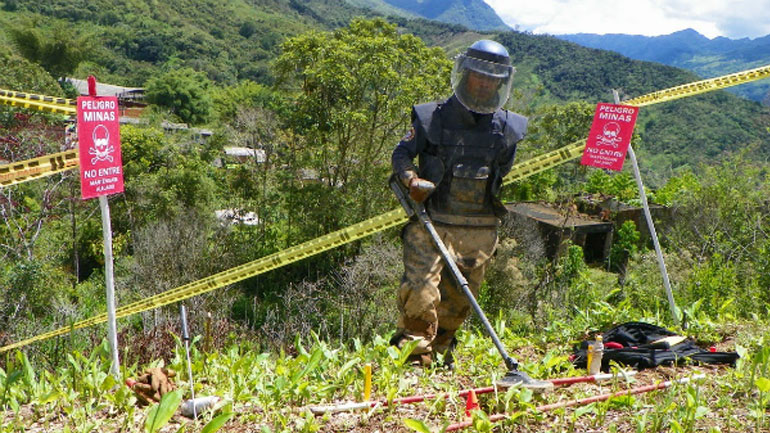 Colombia on Wednesday provisionally suspended a pilot program that seeks the removal of landmines with the help of FARC rebels after one soldier died and two were injured when stepping on a mine.

The accident took place in Briceño, Antioquia where the National Army’s explosives’ unit is working together with locally active guerrillas in a pilot landmine removal program that is part of ongoing efforts to end more than 50 years of war.

According to the Defense Ministry, a 37-year old military official accidentally stepped on a landmine, which ripped apart his right leg. “In spite of medical efforts, he passed away. Two other soldiers injured their hearing but are out of danger,” a press release said.

The victim, a father of two, “served his country with honor for 12 years,” nine of which with the explosives unit, said the Office of the High Commissioner for Peace.

The demining commission, consisting of more than 40 soldiers, three FARC guerrillas and members of the humanitarian organization Norwegian People’s Aid, decided to temporarily halt the demining operations and revise security protocols before proceeding with the operation.

The demining pilot was agreed in March as part of ongoing peace talks.

The government and the FARC agreed in June began demining preparations in a small township called El Orejon where the number of landmines allegedly exceeds the number of inhabitants.

According to newspaper El Espectador, El Orejon counts 100 inhabitants and 3,000 landmines that both the authorities and the FARC hope to remove within three months.

Landmines, prohibited by international humanitarian law, have left more than 11,000 victims in Colombia since 1990.

In spite the risk of civilian casualties, the FARC and other illegal armed groups have used the explosives to slow down army offensives and protect coca plantations.

The FARC, Colombia’s oldest and largest rebel group, has been engaged in peace talks with the administration of President Juan Manuel Santos since November 2012.

Since talks began, the warring parties have reached agreement on the rebels’ political participation and abandoning of drug trafficking, and a rural reform that seeks to reduce inequality in the countryside.

With the armed conflict still going on, the parties are now negotiating how to secure justice for the more than 7 million victims and how to come to a final end to fighting.