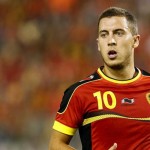 Colombia took control of the ball early on, and was able to keep it away from the Belgians, but this did not result in penetrating the Europeans’ defense.  A fast professional Belgium team were able to hold off Colombia’s offense for the first quarter of the first half.

However at minute 16, the 22 year old superstar midfielder, James Rodriguez broke through to put a shot on goal, which Belgium goalkeeper Simon Mignolet saved.

This attempt started a shift in control however, and Belgium looked like the dominant force once 20 minutes had passed.  Belgium striker and hero, C. Benteke, began to put pressure on Colombia’s defense, the Tricolor’s weak point (still all-star quality).

Falcao had a nasty collision with defender Thomas Vermaelen towards the end of the first half, though both players walked away unscathed.

Halftime came with Colombia lacking on offense and a score of 0-0.

Both teams came back to the field without any lineup changes.

Colombia with a resurgence of energy came back and almost immediately scored a goal.  Rodriguez assisted Falcao who, on a breakaway was able to dribble skillfully around Mignolet in 50th minute.  A difficult and well executed goal.

After this first goal, Colombia took possession of the ball and the game maintaining serious pressure on Belgium’s defense (also considered their weak point).

This proved a wise choice for Colombia as 6 minutes later, Ibarbo scored Colombia’s second goal. This goal nearly got away from Ibarbo as it bounced around in the box, but he was able to control it with his right foot, switch to his left, and confidently slip it past Belgium’s goalkeeper.

After this point the game looked decided from the Colombian side.  Coach Jose Pekerman took out starters Falcao, and Rodriguez, and ended up playing six substitutes by the end.

Belgium worked up a few solid shots on goal, however luck was not on their side, as two of their attempts just narrowly bounced off the goal posts- one in the 74th minute and one in the 82nd.  In between these, Belgium also squandered a free kick from just feet outside the left side of the box.

Then in the 85th, Colombia was able to break through Belgium’s midfield and defense and nearly scored on a breakaway, but the Belgian goalie stopped the attempt.

Once the game was called after a few minutes of extra time, Colombia had demonstrated why it is seated ahead of Belgium in the world rankings.  Colombia was seated fourth and Belgium was seated fifth approaching this game according to the FIFA rankings.

Next week the Cafeteros will have another exhibition match with the Netherlands.

MORE: Colombia prepares for exhibition matches with Belgium and Netherlands

Both teams are set to compete in the 2014 World Cup in Brazil.