Picture of Messi used to conceal 24lbs of pot

BOGOTA, Colombia (AP) — Colombian police checking bus passengers at a roadblock noticed one man holding a poster of soccer star Lionel Messi held in what seemed to be an unusually thick frame. They found 12.5 kilos of marijuana hidden in back.

Authorities say police made the discovery Tuesday night at a bus checkpoint at an entrance to the city of Barranquilla about 700 miles (1,130 kilometers) north of Bogota. 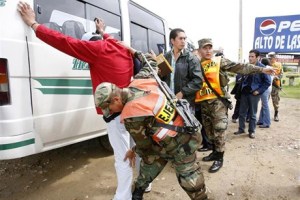 Colombian traffickers have tried all kinds of ways to smuggle drugs in and out of the country. They have hidden drugs under vegetables and inside Bibles and even molded cocaine into trophies.